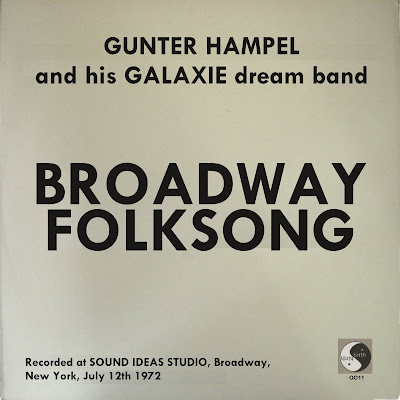 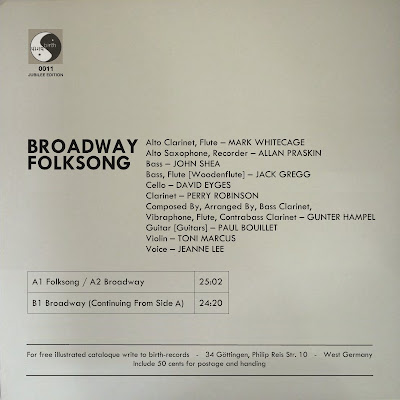 By the early 60's Gunter Hampel was playing around Europe with his own groups, mostly playing vibes. A personal milestone of sorts happened in 1964 during the Charles Mingus Jazz Workshop's tour of Europe. Hampel was in Paris assisting the local promoter, and he put up Eric Dolphy in a house for a few days. They jammed together for long periods of time, Hampel on vibes and Dolphy on his reeds, including of course his bass clarinet. At Dolphy's suggestion they switched instruments for a while, and the American was impressed with Hampel's bass clarinet prowess. (Hampel recalls that Dolphy also demonstrated a surprising skill at the vibes.) Inspired by Dolphy's words of encouragement, Hampel developed his skill on bass clarinet, eventually arriving at his own original style.

Through the rest of the sixties, Hampel met several key artists who would play great roles in his future projects. One was the Dutch reedman Willem Breuker, and another was saxophonist Marion Brown, with whom Hampel toured in 1968-69. Perhaps most importantly, in 1966 he met singer/poet/future wife Jeanne Lee, who plays a vital role in Hampel's music to this day. These connections fell together in Hampel's first major musical statement, The 8th of July 1969, a recording featuring Breuker, Lee, Anthony Braxton, drummer Steve McCall,and bassist Arjen Gorter. Hampel had moved inexorably toward a free form of expression and group interplay which reached a full flowering on The 8th of July.

Early on, Hampel elected to take full control of his work and founded his own label, Birth records. His catalog on Birth (which begins with The 8th of July) is widely varied and includes a solo record (Dances), a duet for Hampel and synthesizer (Symphony No. 6), further work with Lee, Breuker and others (People Symphony), and even a duet recording with the flamenco guitarist Boulou Ferre (Espace).

In addition to his own projects, Hampel and his players were later employed by the composers Hanz Werner Henze and Krysztof Penderecki to play their music. Both were initially inspired by the work Hampel was doing on The 8th of July and Dances and wrote with Hampel's aesthetic in mind. With Henze, Hampel collaborated on the compositions, "so we wouldn't find ourselves in a cage form which we couldn't escape. And he also used some of my pieces."

Hampel gained an important new ally and foil in 1971. American clarinetist Perry Robinson, beginning a long-term association which has continued on and off ever since, joined Hampel and Lee for two recordings, Spirits and Out of New York. His association with the German musician was solidified as he became a member of Hampel's Galaxie Dream Band. This group, first assembled in 1973, features a regular family of players including Lee, Robinson, Marion Brown, saxophonist Mark Whitecage and various other reeds, strings and percussion. 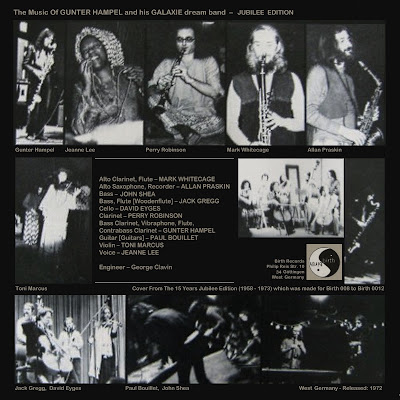