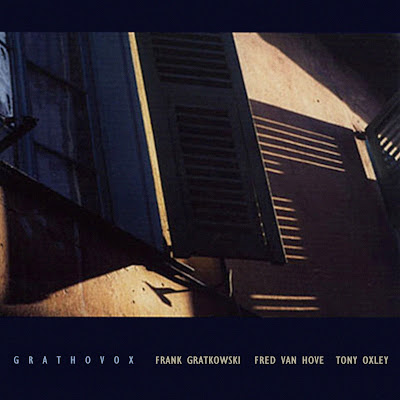 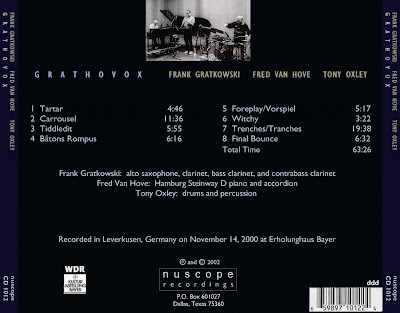 Belgian pianist Fred Van Hove has been a towering presence in improvised music for three and a half decades, though he's still perhaps best known for his monumental bouts with titans Brötzmann and Bennink in the early 1970s. While those two are still slugging it out with anyone prepared to go the distance, these superbly recorded new offerings from Van Hove reveal a delicacy and lightness of touch often lacking in the traditionally muscular world of Northern European improv.
Despite its rather unimaginative title, the Nuscope outing, recorded in Germany in November 2000, is a jewel: Van Hove leaves Tony Oxley plenty of space (more than his other frequent pianist partner Cecil Taylor), and Oxley knows just how to move into it without getting in the way of the others. Clarinettist / altoist Frank Gratkowski is perfectly at home in their company. His mastery of interval, Van Hove's harmonic finesse and Oxley's instrumentation all reveal a profound sympathy with developments in modern classical music - these pieces could conceivably be transcribed and performed as notated compositions and hold their own against contemporary repertoire. Not that they sound composed (they don't), but rather in that they intuitively partake of an idea of structure and motivic development quite in keeping with the aesthetic of European contemporary music. "Carrousel" is a case in point, growing slowly but surely from Oxley's intermittent crescendi towards the high register flurries of the ending, which collapses gently upon itself like a deflating balloon, Van Hove's glissandi dissolving effortlessly into the scales that lie behind them. "Foreplay / Vorspiel" and "Witchy" feature his ghostly accordion, complemented to perfection by Gratkowski's twitching clarinets and Oxley's delicate kit and cymbal work. Oxley is one of the great British percussionists of his generation along with the late John Stevens and AMM's Eddie Prévost, and his playing here recalls both. 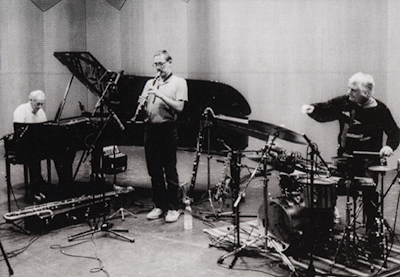 This is a great radio session recorded in Leverkusen, Germany, on November 14, 2000. GratHovOx embodies everything uninhibited free improv can deliver. The presence of two of the genre's most prestigious veterans certainly has something to do with it. Fred Van Hove performs most of the set on a Steinway D piano. He grabs his accordion for "Foreplay/Vorspiel." Tony Oxley produces an astounding number of different sounds from his acoustic drum kit, keeping the electronics very discreet. Between them stands reedman Frank Gratkowski, using mostly instruments from the clarinet family this time around -- his raspy alto sax makes an appearance in the 20-minute "Trenches/Tranches." The trio aims at a kind of free improvisation that leaves room to breathe and listen without getting entrenched in the sonic scrutiny of Berlin reductionism. The music has movement, grace, and moments of sheer excitement that never lose sight of the group sound -- the perfect balancing act. Highlights are numerous but nothing quite compares to "Foreplay/Vorspiel." Gratkowski has his almighty contrabass clarinet in hand, but Van Hove is handling his accordion. To match the delicate wheezes of the squeeze box, Gratkowski decides to stick to the very upper register of the instrument. It may not sound like much but it truly is an understated tour de force. The way "Trenches/Tranches" boils down in its last five minutes to reveal tiny details in the playing of all three musicians also constitutes a moment of pure delight. Simply put, GratHovOx stands as one of the best free improv sessions released in 2002 and comes heartily recommended.