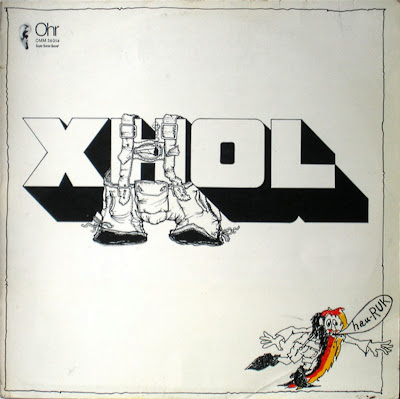 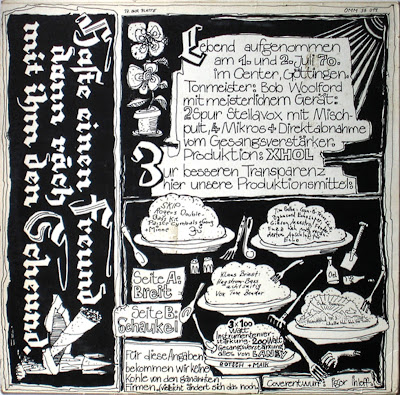 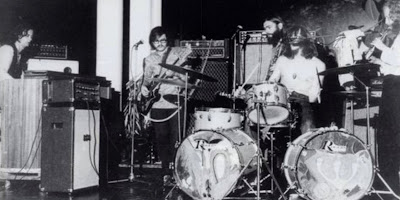 There are many different things about this album that I love, but the one thing that always lingers in me long after I've spun it, is the overall impression of 'feel'. Now as daft as that may sound to some of you out there, I still stand by my statement. This album, with its wonderful title Hau-RUK, is perhaps the benchmark of what you can do musically, when all you have at the front wheel is feel.

Sure all music revolves around feel, and so it should, but with Xhol(remember this is after they ditched the Caravan part of their name) - and especially this album, there is little to hold it all together in form of chords, structure and what have you. This does however not mean that the music is unmelodious or mad - on the contrary; this is some of the most alluring and bobbing music out there.

Two long cuts, and if you've got a hold of the reissue one like I have, then you additionally get yet another 20+ minute track. Think Doors mixed up with The Paul Butterfield Blues Band seriously on acid - and then move this rather rambunctious setting into a more playful psychedelic jazz rock costume.that quite literally sounds as if the music was made in high seas on a river raft. So much bounce to this mother, you wouldn't believe it!

The drums are caveman raw, the organs sound like a bottom dwelling sea creature throwing up rhythmically and in tune, and still there is an imminent sense of chill about Hau-RUK - a characteristic about the whole thing that allures the listener out in deep hypnotising stints, where you feel like running through a maritime carnival in ultra slow motion.

In all fairness though, and just to play devils advocate, this record shouldn't work. It really shouldn't. This is basically jams with no preconceived idea of where to venture next. So you get this snaking thing that writhes and bobs - grows enormous and minuscule, frail and gentle - heck at times it even metamorphoses into something sensuous on accord of the sax - and yet I don't get anything meandering about it. Too many wicked rocking grooves and beautiful serene organ lead sections for that to be true.

I think all musicians know how it feels when everything falls into place - the times where you really cook and take off..........somewhere, and it feels like sex and drugs and everything in between. You catch each other in the music, and wield each other in, dance around, play and communicate through soundscapes, gestures and hidden sonic languages. Hau-RUK is exactly one of those times! Now whether that's down to high doses of mescaline, or just through the sheer power of music, I honestly don't know - and who really gives a flying feck anyhoo?

Xhol/Caravan(the first incarnation of the band), were actually one of the first Krautrock bands ever. They were part of the initial wave together with acts such as Amon Düül, CAN, Kraftwerk, Floh de Cologne, Tangerine Dream and Kluster, but I think it's fair to say that they were the first to merge the psychedelic Kosmische universe with jazz. Later on groups like Embryo, Exmagma and Kraan would go on to further evolusionise this branching of the Krautrock tree, but this was where it all started - with Xhol. This is however not your everyday jazz rock. It feels infinitely more sluggish and larval - like it moves forward on its tummy in huge sweaty gulps - mimicking the kind of early blues infatuated jazz rock feel you'd get from an album like Valentine Suite, although Colosseum and these Germans sound nothing alike. Yep makes no sense whatsoever, but that's how I roll...

The one thing that originally put me a little off with this album, was the sudden change of pace during the second cut, where you suddenly are met with a trashy and somewhat archaic take on the old BB King classic 'Rock me Baby'. This is a thing of the past, and ever since I started eating small children - I've really been digging it. Again - we're talking about feel. The live-in-your-face-untethered-imaginative and highly seductive musical experience that sometimes gets caught on tape, but far too often remain hidden brain polaroids in the back of long lost hippies... Well not this time. This is the real deal.

Catch this one for its thick gooey organ work - better yet get it because of its sensuous and at times wonderfully chirping saxophone spurts - or maybe for it's way of edging you into a murky dream state with everything around you exuding the type of melted reality you encounter in a Salvador Dali painting.