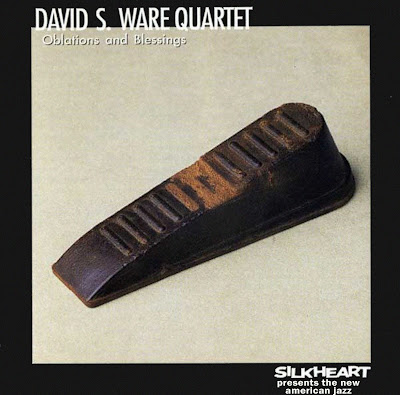 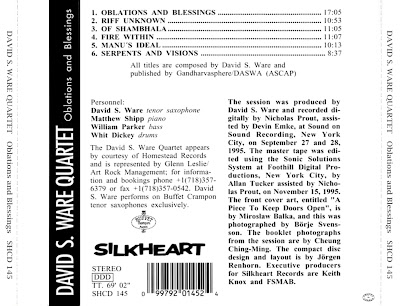 This session, recorded in a superb midtown studio in New York during September 1995, shows the David S. Ware Quartet at the height of its powers. This is one of the foremost groups who played then and their performance here is captured by engineer Nick Prout with extraordinary clarity. The development of David S. Ware 's music is one of the more significant histories in today's jazz and earlier examples from the Silkheart catalogue are 113, 127, and 128. 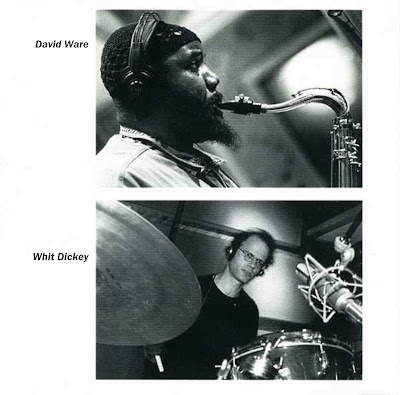 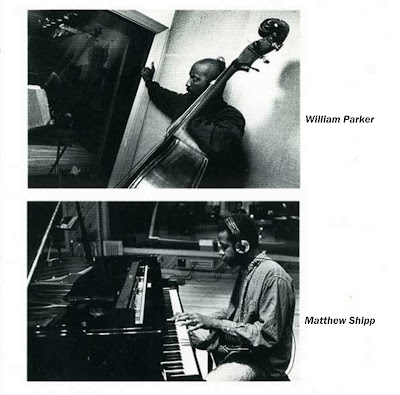 Oblations And Blessings is certainly one of David S. Ware's best recordings, and maybe the best if you're into extended blowing vehicles. The players are inspired, the sound is well- balanced so you can hear all of them clearly, and there's plenty of variety in the pieces. And Matthew Shipp, William Parker and Whit Dickey are up to the task of playing follow the leader because no one has more to express here than Ware. It's a disc for hearing David S. Ware blow hard, long and free--he plays every second of the closer "Serpents and Visions" and doesn't go in for much laying out anywhere.

The opening 17-minute title track hits the ground running with a spiritual intensity close to late John Coltrane that in spots pushes Shipp close to McCoy Tyner territory. It builds inexorably through ebb-and-flow periods of rumbling Parker, pounding Shipp and propulsive Dickey triggering Ware's harmonic squawks before falling away to a bowed bass solo that gives Ware his first break after 10:20 of full-bore playing. 100 seconds of down time later, he's back for the duration until Shipp's lurching chords brings the piece to an exhausted close.

"Riff Unknown" is more in a classic jazz vein with Parker close to double time walking and Dickey close to swinging while Ware swirls and twists, turns and doubles back around the melody. Shipp enters in mid-song--a common device here--and his long solo retains an appealingly light texture after the density of the opener. "Of Shambhala" boasts a gorgeously spare atmospheric opening, with Ware entering crying, then ruminating and extending the lines before handing the baton over for a restrained Parker solo with Shipp's elegant support.

But "Fire Within" gets Ware off and running again with Parker whooping behind him to trigger answering yelps and buzzsaw riffing over Dickey's light cymbals. "Manu's Ideal" is an excellent return to a sort of Trane-spiritual melody with Ware's big, burry tone carrying the medium tempo before a Parker solo and Shipp's re-entrance triggers the saxophonist's closing theme statement.

Ware's outside start to "Serpents and Visions" sounds like musical visions of serpents, Shipp ripples his way in at the two-minute mark and it evolves progressively into Ware's serious pushing to get to Albert Ayler-esque shrieks and cries over Shipp's lower register hammering. You can really hear the interaction between the two on this track before into peters out in honks and silence.

Music is the last thing you should reduce to numbers but David S. Ware is literally playing on 54 of the 69 minutes (give or take one or two) of music here, a simply staggering amount. And he's playing so intensely for that long with that huge tone doing interval leaps and Ayler shrieks, high harmonics and lower-register honks, buzzsaw-quick runs and scale slurs, wringing every possible melodic permutation out of every theme.

The liner notes define "oblation" (via Webster's) as "the act of offering something as worship or thanksgiving." No one who hears Oblations and Blessings could ever doubt the generosity of Ware's offering here. The man must have been absolutely, utterly drained--emotionally, physically and spiritually--after this session.