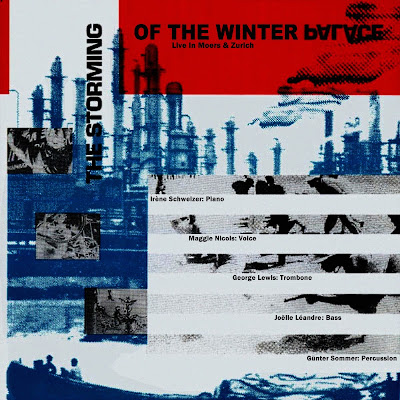 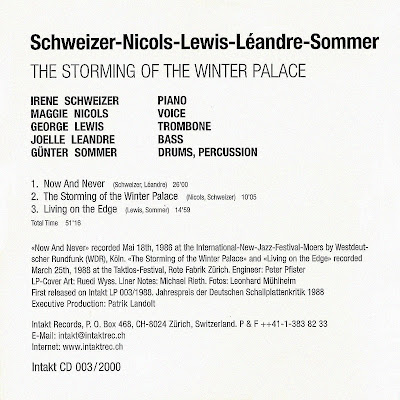 At the Moers Jazz Festival in 1986, the quintet of Irène Schweizer, Maggie Nicols, George Lewis, Joelle Leandre and Guenter Sommer caused quite a commotion. The "Frankfurter Allgemeine" wrote: "a great moment of free improvised music; the listeners gave endless ovations, were stunned, moved, even happy just like the protagonist themselves, who lay in each others arms after the magic process of spontaneous interaction". The album with excerpts from the Moers concert as well as from the subsequent performance at the Zurich Taktlos Festival was awarded the German Record Critics Prize. 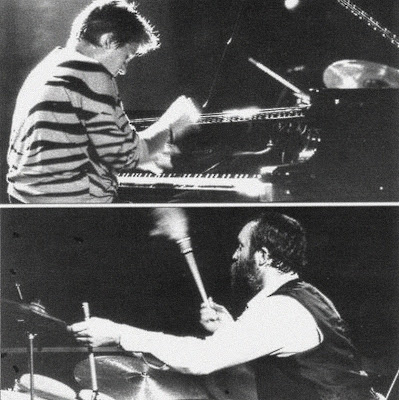 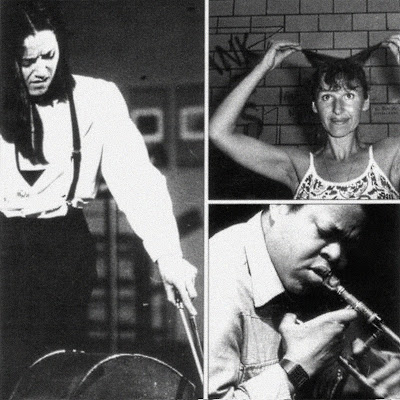 The Storming Of The Winter Palace was originally released on LP in 1988 as Swiss based “ Intakt Records ” has thankfully chosen to reissue this most interesting recording on CD. The 26-minute opener, “ Now and Never ” offers a hearty mix of disparate motifs, glistening choruses and endearing interplay among trombonist George Lewis, vocalist Maggie Nicols, pianist Irene Schweizer, percussionist Gunter Sommer and bassist Joelle Leandre. Here, Ms Nicols displays a supremely masterful vocal range complete with spurts of humor, scat and spoken word intermingled with weaving, multidimensional ensemble work along with an abundance of peaks and valleys. The musicians entice one another with interesting dialogue and shrewd on-the-fly development yet many of these sequences sound composed or pre- planned. On “ The Storming of the Winter Palace ” George Lewis and Ms Leandre are the instigators who often prod Ms Nicols into operatic-style vocal pyrotechnics, which unto itself is rather amazing. The audience in attendance must have literally been on the edge of their seats during the final piece, titled “ Living on the Edge ” as the band pursue vivid theatrics, circular thematic movement along with some downright awe-inspiring drumming/percussion from Gunter Sommer.

The Storming Of The Winter Palace is a showstopper as this writer often thought of the visual aspects; hence, a video of this performance would have been an added treat as the music and overall intensity alludes to one heck of a live performance! * * * * ½