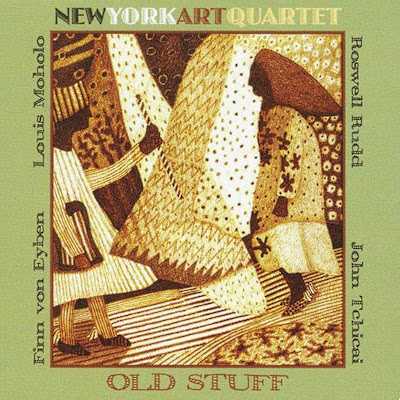 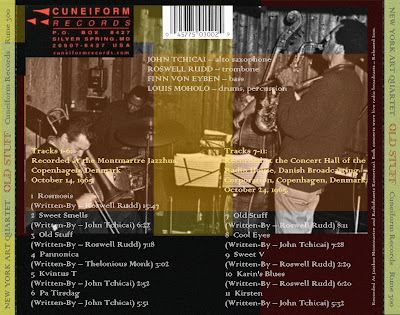 The story behind Old Stuff is that John Tchicai lined up some gigs in his native Copenhagen for the fall of 1965. The regular drummer (was it still Milford Graves?) and whoever the bass player was at the time (Reggie Workman?) could not make the trip, so the quartet was fleshed out with Finn von Eyben coming in on bass and Louis Moholo on drums. Von Eyben sounds fine on the recording and adds his own conceptual influence. However it is Moholo that changes the character of the band in an more dramatic way. He gives the band a totally different rhythmic base. Moholo's time was quite different from Graves: there is in the former a more linear poly-rhythmic thrust to the pulse that propulses the band differently yet still opens it up to an expanded sense of temporal possibilities. It gives Tchicai and Rudd support for more complex yet still free solo statements and they respond beautifully.
And so you get a long set of music drawn from two gigs they played during their stay that fall. The recording quality is excellent, as is the level of the music. It's a major addition to the NY Art Quartet discography and highly recommended! 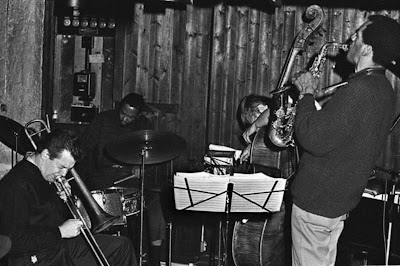 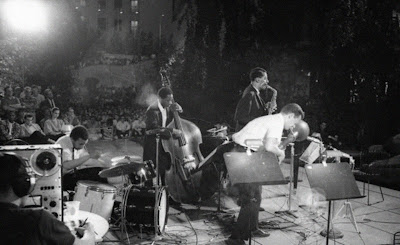 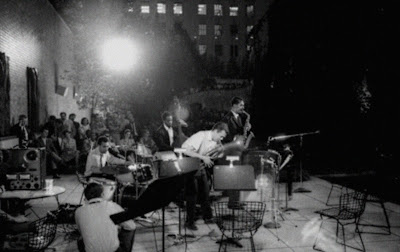 There ’ s a certain exciting charge to early free (avant, new thing, or whatever you wish to call it) jazz, an electricity in the air from those days before anyone knew exactly what was happening, which, in its weird, wily experimentation, translates particularly well on record. Before the classic fire music blow out could be formalized into a clearly-delineated model, there was a strange melange of flavors: Sun Ra ’ s Saturn-bop, Ayler ’ s formative howls, Dolphy ’ s skewed vision of cool, Ornette Coleman ’ s sublime honking, and a lot of other open minds stretching way out as they saw fit. The free-for-all spirit of the times makes for some interestingly timeless listening, and the broadly-named New York Art Quartet was one group that was there to catch the wave. Although the smallness of their deeply respectable discography, now only four official albums deep (and one of those is a reunion session from the year 2000), severely restricted their legacy, the players who have moved through their ranks - John Tchicai, Roswell Rudd, Milford Graves, Reggie Workman and Don Moore, to name a few - have certainly made their individual marks. Thus, the unit has remained a sort of legendary footnote, an early, all-too-brief meeting of the minds right at the beginning of the revolution.

Old Stuff, recorded in 1965 and only now seeing the light of day, won ’ t change that. Less of an all-star lineup than their self-titled debut on ESP, it ’ s more of a glimpse back than a lost classic. Fans of that seminal slab might be disappointed by the absence of drummer Milford Graves, and I for one can hardly fathom the pressure of filling his shoes. Along with Sunny Murray and Rasheid Ali, Graves was one of the founding fathers of the un-metered, pan- rhythmic school of drumming to which many remain beholden. Hardly the established approach in ’ 65 that it is today, it ’ s difficult to imagine more than a handful then (or now) capable of matching his innovation and effortless mastery. Still, Louis Moholo does a bang- up job holding things down. Less iconoclastic than his predecessor, his playing sways and sashays more than it rips and shreds, but not without some serious force. There ’ s a certain go- for-broke roughness audible here, and it ’ s exciting to hear him drive the rest of the players, egging them on even as he keeps time.

Around him, the horns squall and cry, but all within a clear melodic framework. The vibe is less sheets of sound than "Lonely Woman," and Coleman ’ s mark is clearly felt. The melodies and motives are tossed around like pizza dough between Tchicai and Rudd, the only two constant members of the NYAQ family, and their chemistry is, if not revelatory, certainly wonderfully sloppy and loose. Apparently the session was booked in Copenhagen, despite the unavailability of half of the New Yokers. Thus, in addition to Moholo, bassist Finn on Eyben fills in, and you definitely get the sense that the Rudd and Tchicai are leading, going for it despite or because of the less practiced setting. There is a confidence to their tone which more than compensates for the oft-rambling structures.

Overall, the record runs a little long, clocking in at just over an hour. But isn ’ t that kind of the point? We already have two proper mid-60s albums from the NYAQ, as well as a whole slew of other classic studio sessions from this deepest of musical eras. Old Stuff is for the heads who wore through their copies of Shape Of Jazz To Come and Ascension when they first came out, for the completists who can ’ t let a single take slip by uncatalogued. As expected, NYAQ rips, moans, screams, and most of all breathes. It ’ s beautiful, messy, raw and not a little bit fun. Like a lot of other stuff from this time, it sounds like a wild party, and yet still serious as your life. It sounds free, unfettered, and alive. It sounds great.