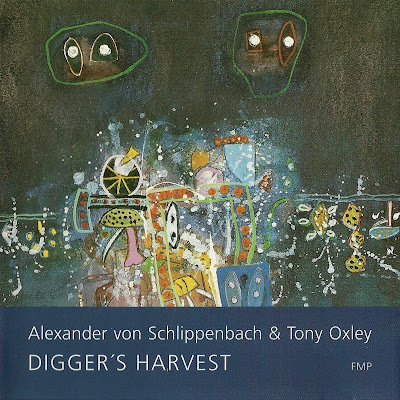 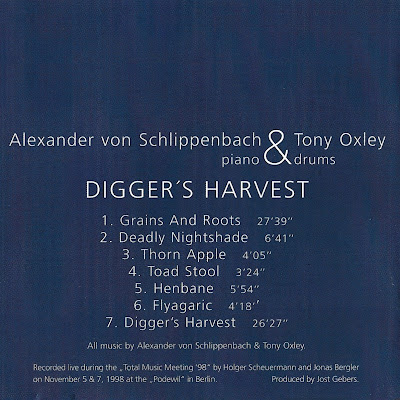 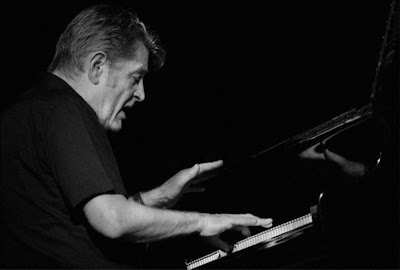 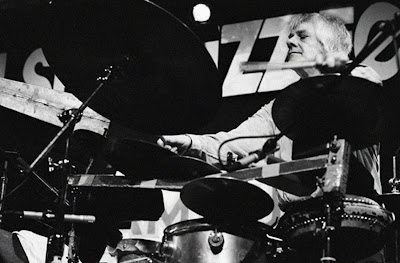 The art of the duet is displayed admirably on Digger’s Harvest by Schlippenbach and Oxley. Using their creative energies and the inherent musical affinity between them, they go on an extended voyage of individual and joint expression. Schlippenbach begins with a deceptively angular style with fingers stabbing at single notes, but he accelerates from zero to sixty in no time flat. Spanning the keyboard in rush-hour frenzy, he builds the set’s nearly half-hour opener into a mad dash and then with screeching brakes slows the pace down to a more reasonable speed. Schlippenbach uses this technique regularly throughout the long program to keep the music off balance and challenging. He states a theme with short strokes and then widens the range with a flurry of notes generated around the core concept. His methodology in developing his solos in this manner is intriguing. A kernel of an idea is expressed, and it then explodes into a plethora of notes spanning the entire range of the keyboard. The process is repeated and new ideas flow in natural succession.
Oxley uses a jagged-edged percussion style in accentuating Schlippenbach’s direction. His playing provides a staccato beat of sudden bursts of energy that take on a muted tone. Oxley frequently uses the deadened edges of his kit to underscore the piano rather than compete with it. He develops a convulsive sound of irregular rhythm and interrupted beat that is the perfect complement to the music pouring from Schlippenbach’s fingers. It has the unsystematic motion of fits and starts, yet it results in amazing musicality when countered by the equally spasmodic outpouring from the piano. It is as though he is playing a game of cat and mouse with Schlippenbach. The piano statement is made, and Oxley expels a fitful round of gunfire under, around, and above it. He hears Schlippenbach and knows exactly where he is going. The music of these two is challenging. It has extensive subtlety that requires very careful listening to absorb the message fully. The effort will be a truly worthwhile exercise.