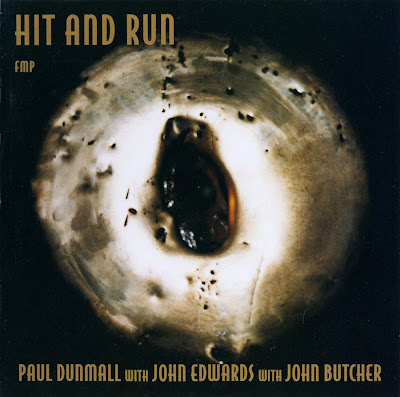 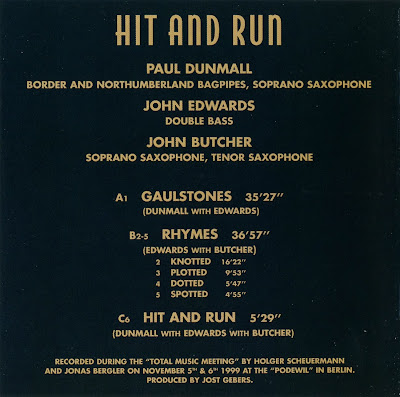 
There are two – really three – distinct groups represented here. The first track, taking up more than thirty-five minutes, is an invigorating duo between Paul Dunmall and John Edwards. Evidently, Dunmall was scheduled to perform with bassist Paul Rogers, who was ill at the last moment, and Edwards took his place. The second is a powerful duo between John Butcher and Edwards, lasting just a tad longer, and the final short track features all three musicians. You might consider this is a welcome opportunity to compare Dunmall and Butcher close up, but their styles are so different that that is not really the point at all. All three tracks have their high points, and stand alone as significant pieces of music. It is unclear why the recording is listed under Dunmall ’ s name “ with ” Edwards and Butcher, since Edwards plays his heart out (even if he is a replacement), and is the only player found on all three tracks, and since the two saxophonists would seem to be equal participants. The Dunmall duo is important for his bagpipe work, which if you have never heard it before, is revelatory. It boasts at least as broad a range as the soprano or tenor, and allows the player to perform separate notes simultaneously, giving the impression of a trio or quartet. It has elements of the keyboard, too, in its fingering. Dunmall is the dominant figure on “ Gaulstones ” , in which he performs ecstatically, producing some of the best free bagpipe work on record – a long way from Rufus Harley. Edwards gets plenty of solo space, during and after which Dunmall switches to soprano. There are outstanding interactions, quick changes in tempo and, at least on soprano, some attractively mellifluous sections. “ Rhymes ” , the piece in which Butcher performs with Edwards, is divided into four distinct sections, which add a dash of diversity. The set with Butcher does not break any new ground, but as with so many of his performances, it offers glimpses of new sounds and directions. While Dunmall relies on over-blowing as an important technique on bagpipes, Butcher focuses more on a range of advanced techniques, including split tones, multi-phonics, flutter tonguing, and others to create a palette of sound. You might call Dunmall ’ s approach the macro-sound, as opposed to the micro-sounds of Butcher – but that is probably too great to generalization as each incorporates varied complexities and overlapping strategies. The promising though short closing piece, “ Hit and Run ” , in which Butcher, Edwards, and Dunmall improvise simultaneously, almost lives up to expectations. Its only downside is its short length, and its somewhat abrupt ending, leaving the listener wishing for more, and hoping for a follow-up performance and recording.
Recommended.