This long-awaited release contains their entire 70+ minute 1980 duo performance at the legendary 1750 Arch Street in Berkeley, California. Bailey plays both electric and acoustic (and breaks a string mid-performance; see if you can tell where!) and Parker plays both soprano and tenor saxophones. This is their first duo release since 1985, and their first release by an American label. An important and historic recording. 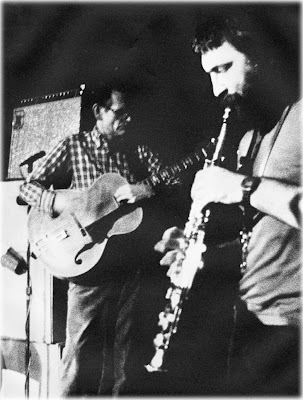 This is a rather lengthy continuous improvisation from two of the most well-known and skilled British free improvisers. It's always interesting to hear Evan Parker before he began to stess circular breathing techniques as his primary mode. His lines are still longer than those of, say, Peter Brotzmann, but the shorter soprano spirals have a delightful way of doubling back as they dance about Bailey's spiky, angular instant edifices. I'll concede to the previous reviewer that Parker is playing circles around the guitarist for much of the disc, but this is characteristic of much of Bailey's "unresponsive" group playing. His frequent apparent obliviousness to other players can be chalked up to his stated preference for the unexpected quasi-Cageian juxtapositions that leaving the "jigsaw puzzle" incomplete can produce. However, there are many points on this cd where the two lock into a rapid tangle that turns into an exciting game where Bailey feints and parries while Parker uses his speed and fluidity to pre-emptively shadow the moves of one the most unpredictable improvisers of all time. Even when Bailey withdraws into disinterest, the saxophonist playfully darts about, attempting to prod him back into battle. Both players have much better cds available, but it's fascinating to hear these two pioneers going head to head before their falling out.

Two different sets of artwork were prepared for the Arch Duo CD. One version was used (the cover of which can be seen here, up), but I thought that might like a look at the version that wasn't used. Sculptures, drawings, and cover lettering are all by Anthony Mostrom; layout and design was done by Steve Norton/Red Notebook.