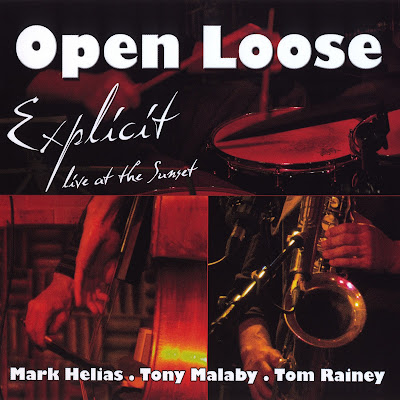 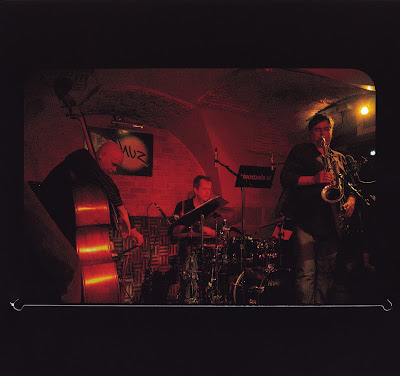 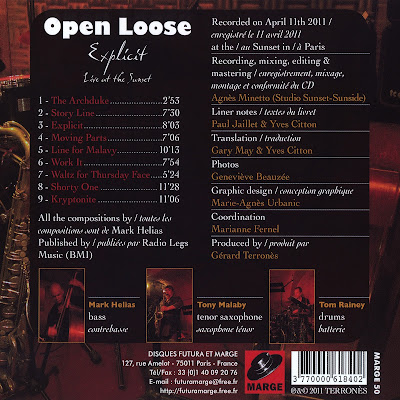 Open Loose, an archetypal improvising band will be celebrating the release of their brilliant new CD “ Explicit ” . The album, recorded in one night at the Sunset Club in Paris, comprises nine new compositions by composer Mark Helias. Recorded in the middle of a two week tour this recording captures the live intensity of new music being explored and turned inside out by master improvisers. Come here the group live and take home an artifact in the form of their new CD. Open Loose – Explicit - Live At The Sunset. 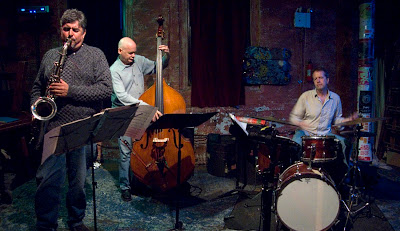 By STEVE REYNOLDS - fresh impressions from the Cornelia Street Café:

...all new Helias tunes ranging from a fractured ballad to a improvised/composed 'out' piece that if played at the start of the first set would have cleared out half the room to incendiary burning groove based monster pieces like the closer the band destroyed the confused universe...
...not much else to be said except I know Evan Parker, Roscoe Mitchell, Paul Dunmall, Ellery Eskelin, Peter Brotzmann, Mats Gustafsson, Joe McPhee and Sonny Rollins all still walk this earth and Tony Malaby *still* may be the *greatest* tenor saxophonist alive...
...and Rainey played this solo intro with his hands that was beyond and then with that closing groove exploded reality for me from 5 feet away with less than a third of the house full - leave before the second set?!?!...
I have heard many many drummers over the years and this performance was simply a mind, man - the whole night but *that* last driving intensely powerful passage was comparable in total incredible genius to Hamid Drake on March 27th, 2001 at Tonic with Kessler and Vandermark or Gerry Hemingway ~ 10 years ago with Barry Guy and Marilyn Crispell or Mark Sanders @ The Knit with Evan Parker, Tim Berne and Drew Gress or Andrew Cyrille @ The Knit with Trio 3 back in the late 90's or even Randy Peterson last December with Mat Maneri's Quintet.
...show of the year - and that includes 2 weeks ago at the Stone...
_ (JAZZ CORNER)

The group here is definitely open and loose, but never too free – working with some really sensitive interplay between the tenor of Tony Malaby, bass of Mark Helias, and drums of Tom Rainey – a trio who are free at points, yet also have a nice sense of structure too – really balancing different modes within the space of a single song! Helias has a really strong approach to his instrument – and his basslines, although sometimes spare, have a deep-rooted quality that really holds the whole thing together – and there's also possibly an intuitive link, given that he also wrote all the tunes on the set. Titles include "Waltz For Thursday Face", "The Archduke", "Story Line", "Explicit", "Moving Parts", and "Shorty One".