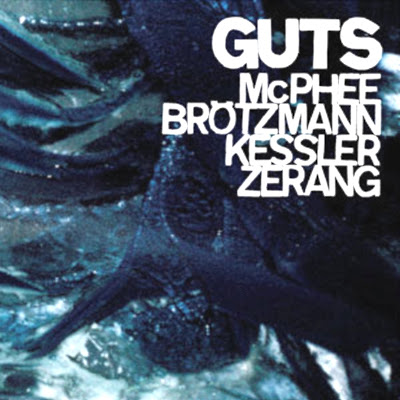 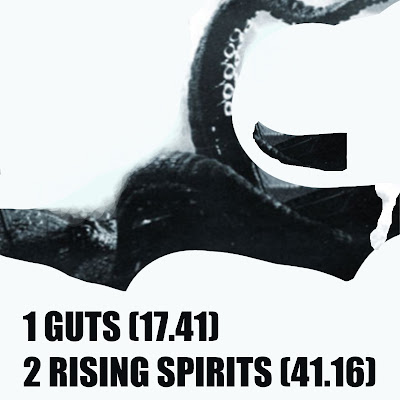 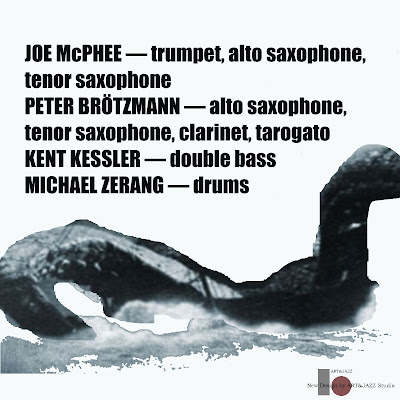 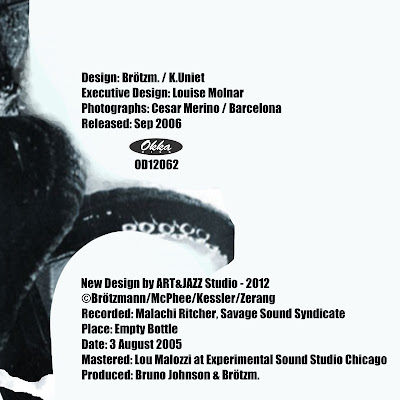 When people die for what they believe in, their actions speak louder than words. At least for a moment. Repeat performances of their deaths are impossible. So it is up to those who survive them to revitalize the symbolism of their deaths. Creative people do this well in the form of a tribute, for they are lending their lives to the realm where they have invested their own spirits already.
The quartet of reedmen Joe McPhee and Peter Brotzmann, bassist Kent Kessler and drummer Michael Zerang have come together in a recording called Guts (Okka, 2007) to honor Malachai Ritscher, who died of self-immolation on November 3, 2006, in protest of the war in Iraq. Ritscher was a musician, photographer, painter, philosopher and recording engineer. He recorded many of the gigs at the Empty Bottle in Chicago, including this session, in 2005.
Nearly an hour worth of music exists on only two cuts, "Guts" and "Rising Spirits". The first begins with a clear, open drum introduction replete with rapidly spun snare and bass drum interplay. An alto intercedes in long screaming arpeggiated lines to overlap the drums underpinnings. A tenor pumps accents throughout the alto stringency and eventually paints a series of raw abstractions. Bass pizzicati enter to round out the sharpness of the horns. The fervently agitated sounds of the tenor and the ceaselessly energetic and ofttimes piercing pressings of the alto stop and go and wind around each other. About halfway through, drums and bass drop out as the sax torrents subside into slow melodic phrasings. The fully shaped melody gradually picks up pace; the drums and the bass re-enter. The improvisation progresses into a full tilt, resolving into stretched out multiple choruses of the theme from both horns eventually to form a conclusive harmony.
A bowed bass and extra-terrestrial percussive sound start "Rising Spirits". The clarinet initiates a sprinkling of the atmosphere with an amoebic contouring of sonic emergence. A tight-lipped embouchure to a quickly fingered trumpet marks the arrival to full-blown instrumental involvement. The sporadic phrasings of the tarogato and the trumpet sparkle on top of the heaviness of the plucked bass and the lightness of touch to the cymbals and drums. An isolated bird-like litany from the tarogato complements repetitions of a sober melody from the trumpet. The bass and drums transform the music with a rhythmically driven surge. A tenor takes the lead and reconstructs abstractions with a series of sour and squeezed chords yielding to the alto, which continues to enhance the texture. The tenor and alto seesaw between high and low notes, melodic counterpoints and discordant and harmonic absorption to unite in a thematically strong coda.
Half the liner notes are comprised of a poem by McPhee. The poetry directs the reader to ponder the contents of the recording in the context of hope—a hope perhaps that the light will shine upon us as long as we remain committed to the contents of our lives.