Near perfect elaboration of a committed improvisational trio ’ s art, this Swiss-American group has been involved in furthering extrasensory mutual creation for more than a decade. Now seemingly able to predict and instantaneously react to even split-second sound dislocation, the trio has constructed a totality where the final note is as crucial as the first and where every one is woven into the overall fabric.

Considering the veteran trio ’ s background this practically supernatural connection is no surprise. During his 40 years in Europe for instance, American bassist Barre Phillips has played with everyone from saxophonist Evan Parker to pianist Paul Bley. Tenor and soprano saxophonist Urs Leimgruber has worked with bassist Joëlle Léandre, synthesizer player Thomas Lehn and many others. His Swiss countryman, pianist Jacques Demierre, is equally proficient in improvised and notated music, having recorded with pianist Sylvie Courvoisier and in a trio with bassist Barry Guy, whose London Jazz Composers Orchestra also counts Phillips as a member.

Despite the CD ’ s supposed division into seven tracks, changes in strategy for these instant compositions merely involve one or another trio member pouring more textures into the mix. For instance on “ Eatlib ” Leimgruber ’ s polyphonic timbres quicken from whirrs to diaphragm- vibrated squeals as Phillips moves from strums to percussive spiccato. Initially adding singular plinks and note clusters, Demierre pedal pumps and thumps on the keys when the saxophonist ’ s extensive circular breathing turns to splutters and chips and the bassist scrubs his instrument ’ s wood as well as the strings for contrasting dynamics.

Or consider the title tune, which ends with high-frequency piano key spanks plus air flutters from the saxophonist, after commencing with tongue pops and a swaying double bass line. Throughout peeping reed vibrations evolve parallel to cascading note clusters from Demierre and col legno pumps and sweeps from the bassist. Reaching a dense climax, the piece positions Phillips ’ shrill whistling and strident slices with tremolo glissandi from the pianist, and the saxist ’ s equally taut reed squeals. Leimgruber ’ s adoption of circular breathing accompanied by high-frequency passing tones from Demierre is another strategy. 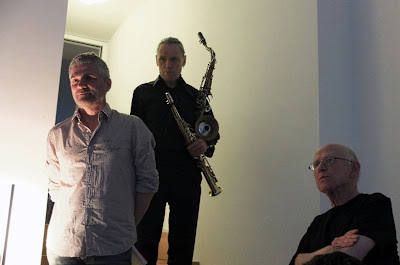 Although no less or more memorable than what precedes it, the trio would appear to be marshalling its inventions for “ Ilbeat ” , the final track, since at nearly 18 minutes it ’ s at least one-half to one-third lengthier than any other. A three-part exercise in broken octave concordance, it unites inchoate fragments into a vibrant whole. Initially aleatoric split tones and strained continuous trills from Leimgruber abut sparkling arpeggiated strums from Phillips and occasional slides and pumps from piano strings. After these languid node vibrations are met by low-pitched bass plucks, Leimgruber ’ s slurring reed pressure swells to staccato and altissimo reflux. This duet is further characterized by high-frequency note substations, wafting split tones from the saxman plus contrasting keyboard patterns.

Leimgruber, Demierre and Phillips may have jumbled the letters in Albeit to title this CD ’ s instant compositions as if they were creating the clues for a word puzzle. In most cases the results are gobbledygook in any language. Conversely the music contained beneath these bizarre titles is some of the finest contemporary improv imaginable.


I also recommend the album: 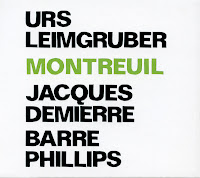 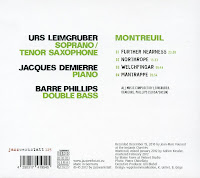 You can find it on the excellent jazz blog Caballo De Fuerza.
Link:
http://caballodefuerza.blogspot.com.ar/2012/11/urs-leimgruber-jacques-demierre-barre.html