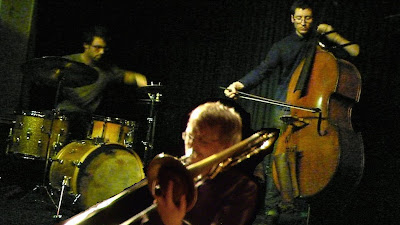 The trio of trombonist Matthias Müller, bassist Clayton Thomas and drummer Christian Marien, The Astronomical Unit is a no-compromise intersection of instrumental personalities able to transcend barriers through the generation of a kind of sonority that is dense or rarefied depending on circumstance. The banishment of whatever may resemble an even vague shape of “ tune ” , or just a predictable structure, is the album ’ s main feature: events occur amidst sudden dynamic shifts, rapid discharges and unstable escalations for the large part of the performances, the music nearly inhospitable at first. But already at the second listen, one is set for a thorough comprehension of what the artists are willing to communicate. Müller is a worthy representative of the gallery of fine improvisers who decided to use trombone as a means of expression, a jargon which in this case appears quite akin to that of Jim Staley, an often forgotten name among the Rutherfords, Zummos and Lewises of the world. His jumpy talkativeness and outstanding reactivity are on a par with an explicit temperamental brilliance, every proposal uttered with spitefulness and irony at once. Thomas is great in utilizing the bass ’ body parts to the maximum extent to delineate a comprehensive gamut of timbres, disentangling the instrument from the necessities of dullard jazzy pumping. Marien represents the third piece of excellence in the group, creating new methods for the disaggregation of the rhythmic particles which, recombined and meshed with additional percussive gradations, push the interplay all along the impervious paths of improvisational capriciousness. The whole album is comparable to someone who finds a way of smiling while launching invectives. A very good effort.

Maybe it is interesting:

BOOMBOX M deals with the world of sound, architecture and texture of places in Marzahn-Hellersdorf. Two walk-in boxes, the gallery visitors can watch the processed tracks to their specific origin. Thomas Bratzke and Ritsche cooking his work in 2002, came in 2004 to Christian Marien. In their performances they explore the world through play various public places. With Ausrucksmitteln between visual art, performance and music they grope from corpus of urban structures that reflect this "raw material" acoustically and visually in a place is an evolving artistic process. 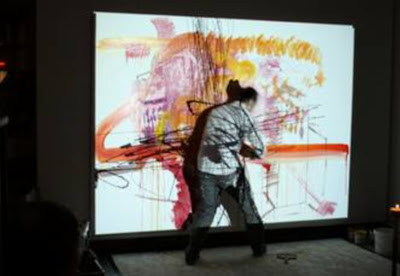 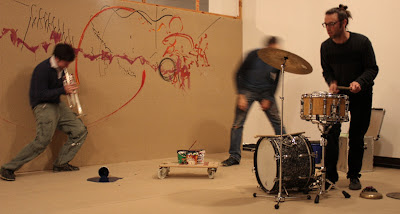 Bratzke Thomas, born 1977 in Berlin, studied design and then sculpture / art at the Art Academy Berlin Weissensee and 2005/2006 was there a master student of Professor Berndt Wilde. The works of Thomas Bratzke are through intensive practical and theoretical approach to urban space, often in conjunction with music and performative elements, marked.
www.thomasbratzke.com

Ritsche Koch, 05.04.1979 The center Ritsche chef creations is the combination of music with other art forms such as Visual arts, dance or language. Give him the project "Ritsche & Zast" with the visual artist Thomas Bratzke brought to different places around the world. His other fields are numerous jazz groups as well as various pop projects such as "Miss Platnum", "Seeed" or "Peter Fox". Ritsche Koch lives in Berlin. www.ritschekoch.com 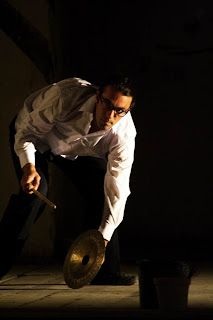 Christian Marien, 1975, lives in Berlin since 2000, studied percussion in Amsterdam and Berlin. As a member of various ensembles (Superimpose, The Astronomical Unit, computer tape, Miss Platnum) he plays concerts in Europe and the U.S.. Particular focus is working with dancers, actors and visual artists at the intersection of music and other artistic expressions.
www.myspace.com/christianmarien