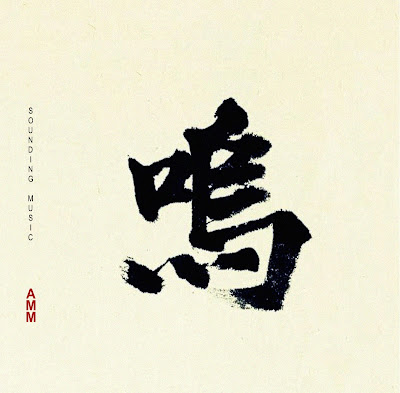 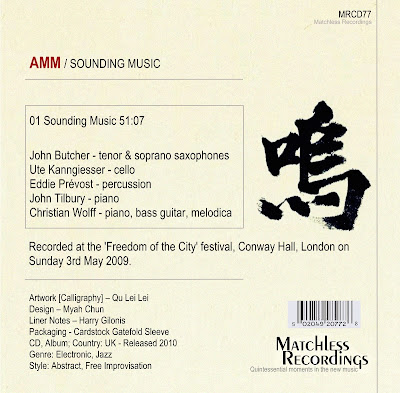 The album cover:
鳴 : Ming (Korean : Myung ) means sound – the cry of a bird, or human singing. A starting- point, then, for words and music both, the fact of sound and its sounding.

So to Sounding Music then, the new album by AMM. The release contains the recording of the quintet performance from last year ’ s Freedom of the City Festival that I wrote about here. The AMM group on that occasion was made up of regular members Eddie Prévost and John Tilbury alongside recent frequent collaborator John Butcher, the American composer and previous occasional AMM collaborator Christian Wolff plus the young London based cellist Ute Kanngiesser, a regular at Prévost ’ s weekly improvisation workshops and here the first woman to appear on an AMM record. I have listened to this CD almost constantly since I received it on Monday, perhaps I have listened to it through some fifteen times already. Going back over the post I wrote following the concert in question I have picked out a few of the thoughts I had at the time. I mentioned in the comments after the post that the music did not feel ground-breaking, but it did feel like AMM Music, perhaps more so than on any of the other occasions I had seen the group since the departure of Keith Rowe. I also mentioned that while he fitted well into the group, Christian Wolff seemed to play the disruptive role in the set, taking things out of what might be perceived as “ safe ” AMM territory more often than not. 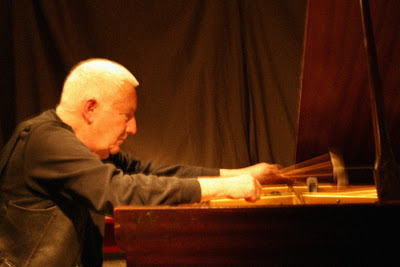 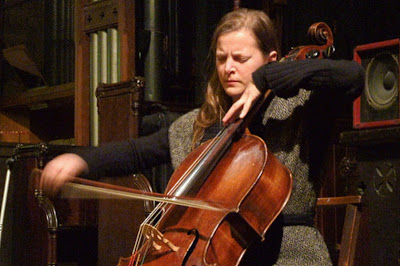 Listening back to the recording now, I have mixed feelings about these thoughts now. Certainly in places this sounds like AMM through and through. When Prévost and Tilbury are working together it really cannot be anything else. I find myself hearing the connections between these two musicians through everything else, no matter what other sounds are there to be heard. There are the little climaxes, the slow arcs towards the small explosions of expression, the way Prévost uses his bowed sounds as the scaffold for the others to climb up and over, the sprinkling of Tilbury ’ s piano sounds throughout in just the places Tilbury leaves them, the connections between these two sets of sounds leaves the hairs on the back of my neck standing on end. They did eighteen years ago when I first hear them live, they still do now. Then though, there are the elements in this recording that stand out as something new, sounds that do not seem to belong traditionally in AMM, and yes most of them here do come from Wolff, the little burst of pocket harmonica, the tapping of stones together that ends the performance, the single plucked guitar note that ends a section of the music twenty minutes in, but they don ’ t sound so intrusive here, just little elements that catch your ear as unusual. Kanngiesser also stands out now and again as something new, the moment two thirds of the way through when after a mini climax the sounds drop away to find her bowing a series of slow notes in a fluid, almost tuneful manner really catches the ear. So what we have is AMM as we know them, augmented by some new elements. John Butcher by the way, plays wonderfully, and sounds completely at home in the group, none of his contributions sound out of place at all. 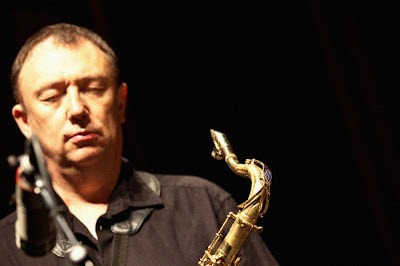 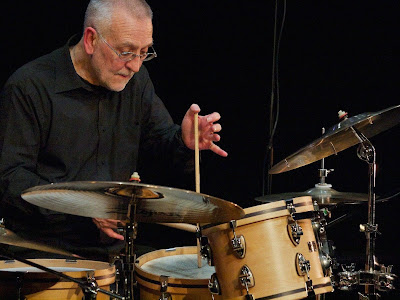 No matter how familiar the end results here might end up being, the one thing that has occurred to me over the past few days listening to this music is the amount of risks that were taken in its creation. Risk-taking has always been a part of the AMM philosophy, and the danger involved with potential failure has always been something encouraged rather than shied away from. For this recording, there is the obvious risk taken through the assemblage of a quintet playing percussion, piano. sax. cello and a table top electric guitar. The history the group has with that arrangement of instrumentation left a great weight of expectation hanging over the performance. Then there was the inclusion of Kanngiesser, her gender of course not a risk at all, but her relative inexperience compared to the weight of musical history on stage around her could perhaps been seen as a risk, certainly it is unusual for someone so young and without many years of playing experience to join the group. Then there was the uncertainty concerning the health of John Tilbury, who had been at a hospital that very day and was recovering from a stroke. He played with just one hand on the day. Despite all of these things, some unavoidable, some deliberately created by Prévost and Tilbury the music contained on this album is wonderful. It captures AMM, where AMM are right now, or where they were on the 4th May 2009. 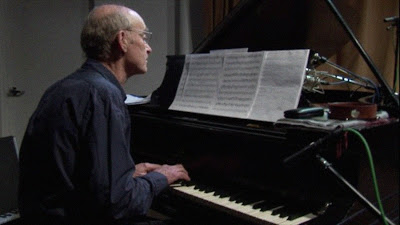 It shows a spirit of invention, a challenge to the musicians involved as new musical relationships needed to be forged, and also a sense of playfully creative mischief in the return to the quintet format. The group has always changed, always evolved, often sounded different, but the underlying ethics, the way the music is approached, considered and subsequently played is as strong here as ever. There is no resting on laurels. The group didn ’ t have to be expanded for this performance but it was. If Trinity was the album that really convinced me that the group was as vital a force as it ever had been, then Sounding Music is the album that shows that the music can still be stretched and expanded outwards into new areas successfully. So not groundbreaking in any wider sense, then that has never really been a goal of AMM, but considered as new ground broken for a group with a forty-five year long history then most certainly. Wonderful people, wonderful music, thoroughly inspirational.