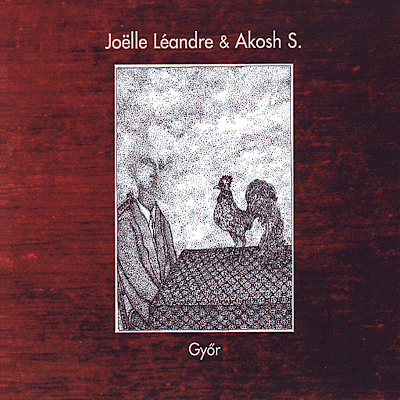 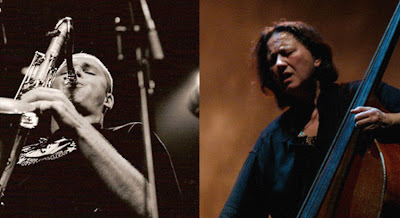 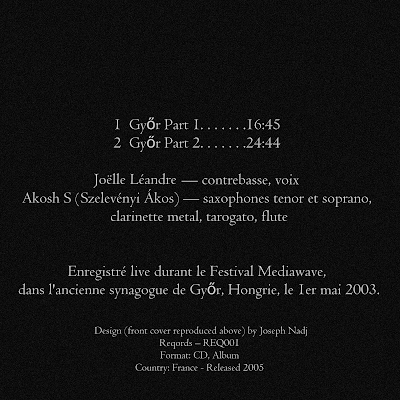 Naturally, many strategies pursued solo can be as satisfying done in pairs. The extended mutual improvisations on Györ prove the veracity of this statement. Initially the sonic intermingling is such that it sounds as if Léandre and S could be playing different components of the same instrument, but soon the bassist advances to tremolo vibrations and the saxophonist to smeared and echoing timbres. As her bass lines fatten and become lower- pitched, he roughens his tenor tone with tongue-slaps and trills, and she responds with double and triple staccato swelling.

Unleashing his metal clarinet, S shrills irregularly-pitched contralto chirps until Léandre ’ s encircling continuo leads to a solo section. Taking up the challenge, he reappears with intense, sonorous obbligatos that uptick to tongue-slaps, glottal punctuation, and bell-muting episodes. Finally his textures splinter into shards of trilled and popped notes in ghost registers and she continues strumming, setting up a proper backdrop on which variations can be displayed. The finale involves crooked reed whines on his part and stropped, jagged perambulating string jettes on hers.

Even more spectacular, the nearly 25-minute “ Györ part 2 ” weaves Jewish Magyar intonation into the performance through S ’ a cappella ululation of sustained shofar-like timbres from his taragoto. After about a minute, Léandre joins in with darker, sustained double-stopping behind his ethnic-styled double-tonguing. Changing positions, the double bassist moves to the forefront, exposing variations on choked spiccato patterns that are struck near the peg box as well as the bridge. Protracted thumps then intermingle with flute tones from S, which in context sound positively bird-like and melodious. At this point, panting verbal interjections appear along with slapped and stopped plucks from Léandre. With the metal clarinet back in use, S chokes out strangled yelps in between Herculean gusts, matching the bass woman ’ s stentorian sweeps and conspirational, whispered asides.

Not that all the notes are discordant, however. Slightly after the midpoint, S plays mellow, unaccompanied variations on the theme, with his clarinet tone as legato here as it was atonal earlier on. As trills, slurs, and ghost notes bubble through his instrument ’ s body tube, and before he reenters with wiggling tongue-stopping cadences, the bassist ratchets up her harmonic intensity, toughness, and atonality. Conclusively, the climatic crescendo reveals choked, bellowing note piles, each rougher than the next. Beginning the postlude, Léandre gentles the reedist ’ s grainy growls and irregular pitch vibrations with a soothing continuum. These sweeping harmonies dissolve into single notes, pure sounds and finally silence.