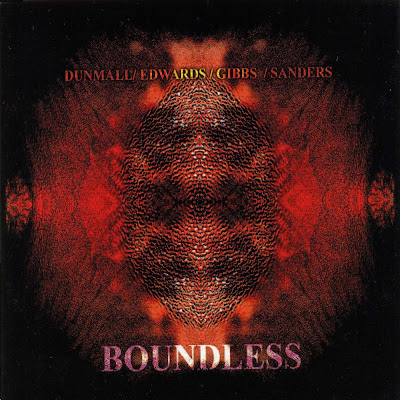 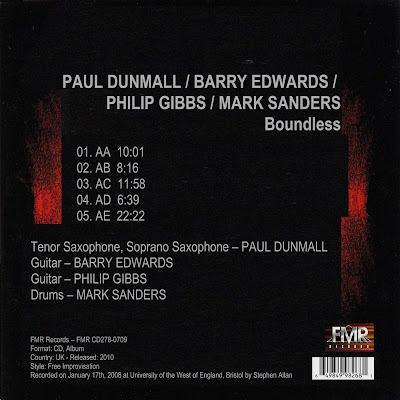 "Boundless energy, boundless creation,, and boundless musical integrity! These musicians , the finest improvisers in the uk produce here a never ending stream of highly stimulating improvised music . The music threads its way through endless permutations of mood and dynamic range , but always with a total and uncanny empathy. No musical ideas are excluded, its all valid and there areas of extreme free jazz feel to electronica as well as collective improv. But what words can you use to describe the musical range, its so large, so full, so rewarding. Listen with unbounding enthusiasm and elation to the musical outpourings of masters of the genera!!! A two guitar setup could have been a bit busy but it works perfectly as the two disparate approaches complement perfectly Sanders sublte drums and the ever brilliant paul Dunmall."
- FMR

Multi-instrumentalist Paul Dunmall is no stranger to Trevor Taylor's FMR label; two of his band mates on this energetic improv date, drummer Mark Sanders and guitarist Philip Gibbs, are certainly familiar names to the Dunmall enthusiast. Guitarist Barry Edwards is the relative unknown here, having recorded very infrequently and with Dunmall only once before, also for FMR. This album boasts Dunmall's unique blend of free jazz and European improv, but with a twist, as Edwards' fretwork ups the anti and the volume.

Right away, the two guitarists lock into a multilayered dialogue of timbral transparency and tonal complexity. Their delicate musings, augmented by Sanders' crystalline cymbal strokes and deep bass drum rumbles, form the perfect backdrop for Dunmall's entrance. His playing embraces the atomistic concerns of late Coltrane while maintaining a fluidity and intricacy that's all his own. Listen to the hairpin precision with which he'll inflect certain tones, his tenor raising or lowering pitch by a whisker's breadth amidst the subtlest of dynamic shifts. Even early in the disc, ideas seem to flow from him like fresh water, as was the case only with prophetic figures such as Jimmy Lyons.

As the disc progresses, it is Edwards that continually pushes everyone beyond the comfort zone. He is capable of an endless variety of timbres, from bell-like overtones to crunchy distortion. Derek Bailey's fluidity might be a point of comparison, but there can be more "out" rock in Edward's styling, ala Mark Ribot or Sonny Sharrock.

It all adds up to an exhilarating experience. There's a thrilling moment in "AB," where Edwards is sliding and bending, Dunmall's screaming, Sanders swings the cymbals while interjecting bursts of raw percussion, and Gibbs is anchoring the whole thing with those razor-sharp alien harmonies only he knows.

There's contrast a-plenty as the album proceeds. On "AD," Dunmall and Sanders sit out while the guitarists have a field day. A wonderful drums and saxophone dialogue opens the final track. This is one of Dunmall's most interesting sessions to date and an excellent addition to Edwards' fledgling discography.