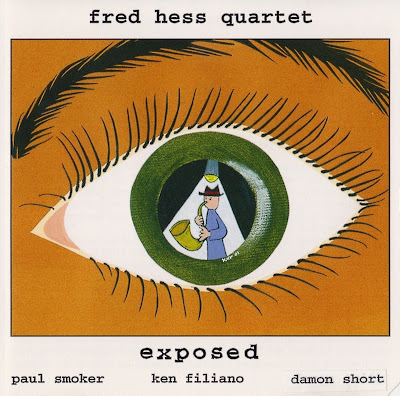 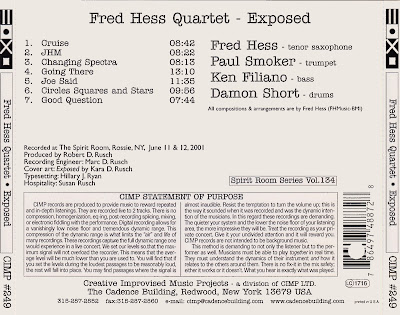 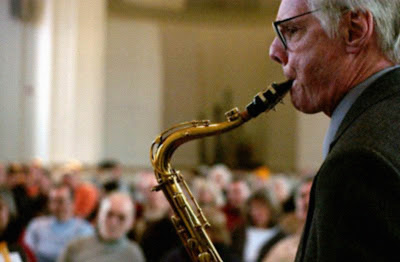 Boulder, Colorado doesn ’ t crop up often in serious conversations about creative improvised music. But based on the serendipitous contents of this new CIMP release perhaps it should. Fred Hess founded the Boulder Creative Music Ensemble at the onset of the Eighties and according to producer Bob Rusch the aggregate of creative improvisers continues to this day. The longevity of the ensemble illustrates a truth that is integral, but often taken for granted- grass roots mobilization and dissemination has always been the music ’ s life ’ s blood.

Joining Chicago percussionist Damon Short and CIMP staples Smoker and Filiano Hess brings to the table seven originals for the newly formed ensemble ’ s gregarious consumption. Several of the pieces have strong free-bop flavors, like the opening “ Cruise, ” which ambles along on a fluxing current from Filiano and Short after angling through an obliquely rendered head. The acronym “ JHM ” is never explained, but it ’ s musical guise exposes itself through a finger chaffing solo from Filiano replete with the bassist ’ s own muffled scat accompaniment. Short ’ s sticks caulk the cracks while applying appropriate friction to keep a flume of cymbal static alight in the bargain. Smoker opens up with a flurry of valve-guided bursts goading Hess to chomp and chew at his reed and in so doing dislodge a downpour of soaring, scalar lines. Filiano initiates “ Changing Spectra ” with watercolor washes of feather light bowed harmonics ushering the smeared tones of the horns and Short ’ s undulating array of textural accents. The track never adopts a discernable center for too long and is instead evolves as a circuitous excursion through freely associative call and response. “ Going There ” picks up right where it ’ s predecessor left off, sounding a vaguely anthemic head before locking down on a discernable rhythmic framework via Short ’ s robust traps. Unexpectedly the momentum soon dissipates into another moody musing, this time from Hess, before once again building steam. These unexpected shifts in tempo and design are both liberating and frustrating. They speak directly to the musicians ’ pact to position their own desires in a place of paramount importance.

On paper this date may not seem a deviation from the stereotypical CIMP fare- piano-less quartet takes a stab at passionate free jazz showing of formidable technique in the process. Judged by these largely superfluous (but all to prevalent) criteria it isn ’ t. But careful conscientious reveals the true . That ’ s one of the abiding beauties of improvised music. Even with what might be considered generic implements erudite musical minds can still devise exceptional methods of expression.