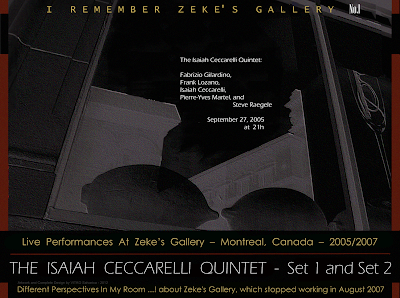 Graphic Design:
Poster – No. 1
Live Performances At Zeke’s Gallery – Montreal, Canada – 2005/07
Different Perspectives In My Room ...! about Zeke's Gallery, which stopped working in August 2007
Artwork and Complete Design by VITKO Salvarica
ART&JAZZ Studio SALVARICA – 2012
The used materials are the old photos, for the new posters.


The Zeke’s Gallery Performances & Interviews , were included live band recordings, poetry readings, theater performances, and interviews with artists and other people involved in making art and culture in Montreal. A fiercely independent art gallery started in 1998, Zeke's Gallery began recording the bands and poets who performed in their space in 2001. As time progressed, the recordings began to expand in scope and incorporated in-depth interviews with artists exhibiting at the gallery.

(Excerpt from interview)
Zeke's Gallery closes its door for good tomorrow.
Chris "Zeke" Hand, an outspoken advocate for fringe art, opened the alternative art gallery on St. Laurent Blvd. almost 10 years ago. But the decade has taken its toll and Hand wants a change of pace.
"I'm 45 years old," Hand said. "It's hard competing with the 20-year-olds out there pushing art."
Hand said there were no other alternative art galleries in Montreal when he opened up shop but now there are more than 10 similar galleries, most of them in Zeke's neighbourhood.
"I would become emperor of the world and force everybody to build up their own collections of Quebec art," Hand said. "Quebec artists are fantastic and don't get the recognition they deserve."
_ By The Gazette (Montreal) August 30, 2007


Periodically, in several episodes, I'll introduce you to some interesting shots, which occurred on the premises of Zeke's Gallery. The material I found on "The Zeke's Gallery Podcasts".
I fixed the sound quality, digital audio format is MP3@320, and you can find a link in the comments.
As such, this material, will be published only on this blog.
I hope that you will discover something new.