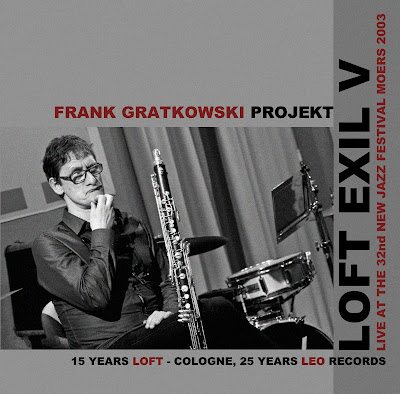 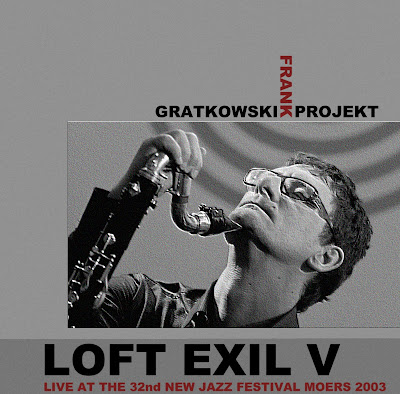 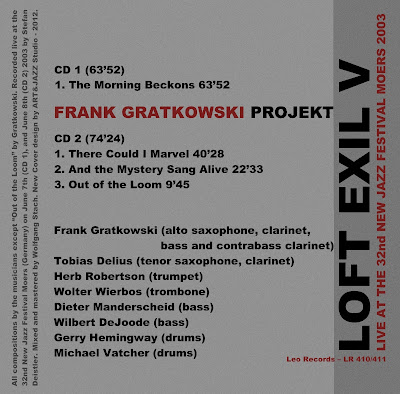 Milestone birthdays are as fine a catalyst as any for convening all-star aggregates of improvisers. Evan Parker teamed with colleagues from his two longstanding trio associations for his 50th. The results released on the Leo label were memorable and still rank in the top tier of his discography. Paul Dunmall followed suit when he hit his own half-century mark by conscripting his Moksha big band for a BBC-commissioned concert. German reed maven Frank Gratkowski, a guy who can count both men as peers, marked his 40th in similar fashion. Coordinating celebratory gigs as part of the 2003 Moers Jazz Festival, he assembled a formidable septet fronted jointly by his own horns, trumpeter Herb Robertson, and trombonist Wolter Wierbos. A dyadic rhythm section comprised of Dieter Manderscheid and Wilber de Joode on basses and drummers Gerry Hemingway and Michael Vatcher, divided into separate stereo channels, completes what reads on paper as a powerhouse collective. And as if that weren ’ t enough marshaled might, the set ’ s second disc finds Tobias Delius joining in on both tenor and clarinet, further swelling the band to octet size.

Loft Exile V also celebrates Gratkowski ’ s enduring relationship with H.M. Müller, proprietor of the Loft, a performance space where the reedman got his start along with a still-growing alumni of other European musicians. Assembling his dream band in a crowded formation against one wall (pictured in a landscape shot in the liners), Gratkowski largely eschews his customary compositional intricacy, opting instead for looser free-range blowing. The two dates captured each carry an ad hoc feel, with the players tossing out the formalities of a rigid, premeditated roadmap and simply seeing where there shared ingenuity takes them. Gratkowski supplies the single ‘ composed ’ piece with the closing “ Out of the Loom ” . It works as a fitting capstone to the mammoth slabs of free improv that precede it. Point-of- entry track demarcations further leaven the density by allowing for easy episodic listening. The first disc ’ s hour plus “The Morning Beckons” contains ten such tags.

The music is much too sprawling and discursive to reconstruct an accurate itinerary within the space of a review (and why read a faulty facsimile when one can take the trip in person for the price of a parting with a small stack of bills?). Arresting moments are numerous, starting with the opening fracas that finds the horns bristling and blustering atop a stomping crosshatch of snap-plucked basses and stentorian drums. But there are also a fair number of quietly palaverous passages too, still strung with tension. A loping two-prong pizzicato groove surfaces and Wierbos ’ mute-socketed brass spreads metallic glisses. Arco harmonics weave with floating flute-like sonorities in a creaky dance of ethereal tones only to turn knotty and diffusive once again with the ‘ rhythm ’ section thwacking and smacking away at its instruments. Gratkowski ’ s all-stops-pulled alto solo in the crowning closing section represents an energized apogee. Delius ’ presence on the second disc also helps in shoring up the more meandering sections too.

Some listeners will probably second-guess Gratkowski ’ s decision to mostly suppress his composerly urges in favor of freewheeling improv. For those doubters there are plenty of places in his existing catalog to find solace. His jubilee shindig might not place on par with the likes of Parker ’ s, but there ’ s still much enjoyment to be had. With luck Gratkowski ’ s own 50th will stir up an even more potent habanero heat.