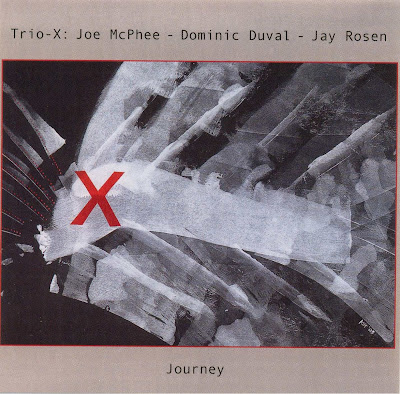 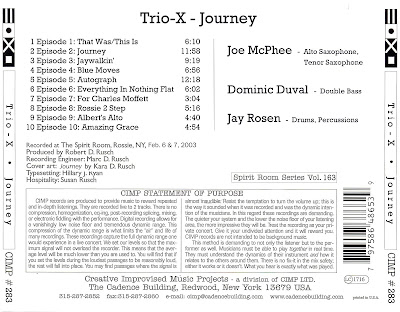 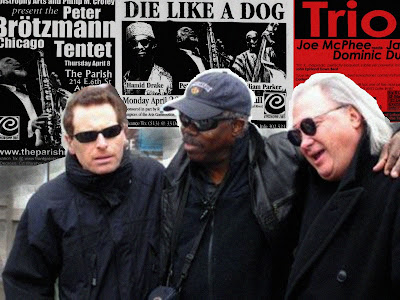 In the music industry, politics and economics continue to share uncomfortable commonalities with the racial disparities that gained the national stage during the Civil Rights Movement. These days ’ inequities aren’t so much based on complexion as they are on artistic choice. Choose creative improvised music and you ’ ll likely be playing the fringes without a record contract.

In the Sixties, the dismissal of Anglican surnames in favor of the letter ‘ X ” became a means of symbolizing African American disenfranchisement. The trio of Joe McPhee, Dominic Duval and Jay Rosen adopted the signifier for analogous reasons. Their collective X is meant as a comment on the ambivalence of most press to their music and an expression of the resulting anonymity it occasioned. The name stuck and four recordings later certain segments of the media and public are now the wiser, as plaudits continue to greet the three players who now comprise a fully seasoned unit.

For their latest excursion Journey, the trio adheres to extemporaneous pieces with the evergreen spiritual “ Amazing Grace ” being the sole standard, so to speak. After a brief prelude of bass and drums, the calm before a rising storm, McPhee’s tenor saxophone takes wing with a leathery flap of coarse-grained phrases. Bassist Duval and drummer Rosen stir up a swirling backdrop, prodding and pulling in eddying rhythmic currents that put their respective instruments through a grueling set of paces. The title track unfolds at a less feverish clip, radiating out on Duval’s dour arco ribbons and McPhee’s somber legato lines. Rosen adds subdued gong and cymbal embellishments, leaving the bulk of his massive kit to the jurisdiction of silence. Midway, the sounds congeal into a forward-marching tempo and McPhee’s breath hardens, splitting in places into emotion-heavy overtones.

A funky backbeat fuels “ Jaywalkin ” and Rosen has a chance to mix things up with Duval in faux hip hop style. McPhee honks and shakes his tail feathers on top, favoring a meaty tenor tone caked with highly flammable vibrato that eventually explodes in a burst of flanging notes. “ Blue Moves ” resides at the other stylistic pole, a contemplative poem built from the quiet patter of Rosen’s mallets and McPhee’s lyrical alto soliloquies. Duval’s improvised bass reverie opens “ Autograph ” and Rosen follows on scuttling brushes. But McPhee bides his time waiting until the median to voice his thoughts at length via stoop-shouldered tenor. It ’ s an approach that contrasts sharply with the caustic blowout that hits with crater-causing impact on the aptly named “ Everything in Nothing Flat. ”

Rosen takes a swift, but precisely measured solo turn on “ For Charles Moffett ” in honor of the departed drummer before the trio reconvenes on the good-natured, heavily syncopated “ Rossie 2 Step, ” so named in homage to the town which CIMP HQ calls home. The anthemic “ Albert’s Alto, ” which finds McPhee reveling in Alyeresque vibrato above a porous rhythmic pattern, rounds the program out along with the aforementioned gracious spiritual movingly interpreted in memory of Duval’s deceased wife.

Trio X will no doubt continue to engender quizzical responses and an absence of recognition in the public at large. But listeners familiar with what lies beneath the alias in the names of McPhee, Duval and Rosen know what to expect when it comes to the music. This outing does not disappoint and advances the exceptional track record established by their earlier releases. With their growing popularity, the impetus of their chosen sobriquet may no longer hold immediate sway, but the reasons behind it still speak to the obscurity faced by so many of their peers.