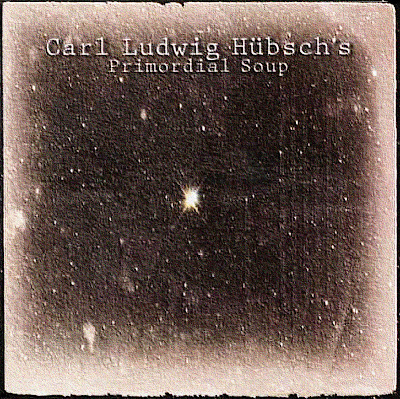 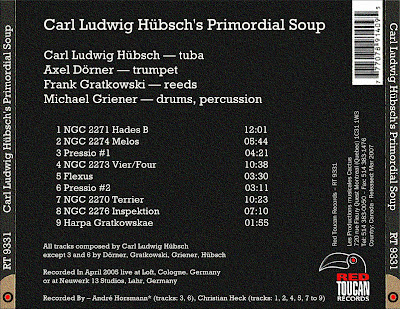 "My playing is focused on music as a structure in time. All focus is on the genesis of the moment. While emphasis and plot are fragmented and given the freedom of a new point of departure, utmost care is given to awareness of musical flow and continuity of the play. Through the use of avant-garde and self-invented performance techniques, the tuba acquires completely new characteristics as a brass instrument. An innovative array of unexpected sounds is heard, the instrument is seen from a fresh perspective, and the audience is confronted with a novel way of perceiving time."
(Carl Ludwig Hübsch)

Primordial Soup is based on material composed by Hübsch, who is accompanied by three of the best artists of the German jazz improvisation scene. An innovative listening experience through an amorphous, unrecognizable, de/structured sound.

Carl Ludwig Hübsch's Primordial Soup is made up of German free jazz stars, yet they are called upon to navigate some very complex compositions. That is not to say that the pieces do not allow for some extended improvisation. It is just the knowing where the written stops and the free starts that is beyond recognition.

The opening track, a twelve-minute introduction into Primordial Soup's mission statement tentatively slips across as a classical piece of music that is extended, elongated and infused with improvisation tools. Midway through NGC 2271 Hades Bb the logical progression of the composition stops. The nothingness begins again with trumpeter Axel Dörner's whispered breath technique. Is it the same song, but with a written passage of silence? It certainly must be the breathy growls and uttered tones, whether improvised or notated, are mood stabilizers.

It is as if the composer has written with tools that are all now familiar within free jazz; he has simply gathered them into his color palate for music making. The obvious reference for a track like NGC 2273 Vier/Four with the off-kilter measure and the tuba bottom is Anthony Braxton. But Hübsch is less serious (in the best sense of the word) than Braxton. Compositions written here must have been developed with the individual players in mind. Hübsch allows the familiar playing of Dörner and Gratkowski to blossom as he does not straightjacket each player by his writing. For his part, the drummer Michael Griener is a colorist and a fine collaborator with the other players.

This music might be one of the finer examples of how free jazz can be tailored into not randomly coherent, but orchestrated, coherence.


This music has great depth, and what the musicians manage to create, not only by getting unknown sounds out of their instruments, but also by creating sound sculptures you've never heard before, is a great listening experience.