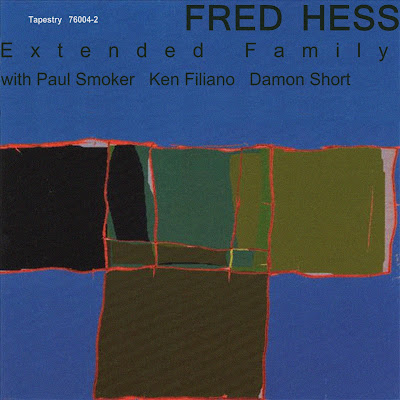 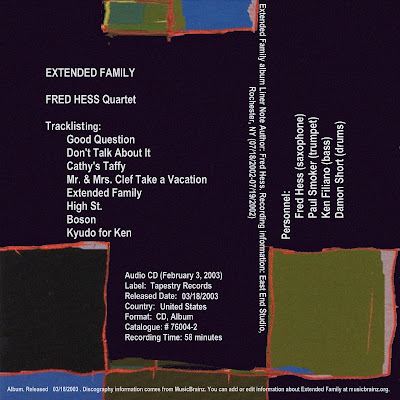 Jazz is sometimes described as a musician's music, a rarefied art form that only gains true appreciation from those whose sensibilities have been heightened by years of study. It also perhaps a reflection on the fact that jazz musicians are all too often more concerned with impressing their musician peer groups than pleasing audiences. Extended Family is an album that is only likely to please a very small number of people with extremely narrow musical interests.

Fred Hess's latest recording is an album of original compositions for tenor, trumpet, bass and drums. It's a so-called progressive affair that showcases the leader's virtuosic tenor playing and Paul Smoker's distinctive trumpet style. It's a hard listen, but not for the right reasons. The difficulty here is maintaining interest in the music.

The opening track "Good Question" is a 12 bar blues with an angular be-bop melody that selfconsciously avoids square phrasing. Hess's blowing opens confidently as he demonstrates his speedy technical mastery. However, none of the phrases are particularly inspired and you're left without a shadow of doubt that he's spent years obsessively practising scales and note patterns.

Ken Filiano on bass takes the next statement which reminds you how unsuited this instrument is to jazz soloing, even in his skilled hands. Smoker's trumpet is the most distinctive of the solos,moving between bluesy phrases and rapid, scribbled runs of hidden shallows.

"Mr and Mrs Clef Take a Vacation" is a long free piece that has little to commend it. In the liner notes it's described as an illustration depictinga couple's eventful holiday which includes a harrowingabduction by aliens. It's just like every other mediocre free jazz track you've ever heard and wish you hadn't.

This sort of line-up, which omits a harmony instrument, is extraordinarily difficult to get right. In the hands of geniuses such as Ornette Coleman, John Coltrane, or Sonny Rollins, the harmonic void is filled by flashes of inspiration and sheer musical energy. More often, the absence of a harmonic instrument results in an empty and alienating sound.Maybe the Fred Hess Quartet, like Mr and Mrs Clef, would benefit from getting away from the alien and finding a way to connect with normal humans who enjoy music.