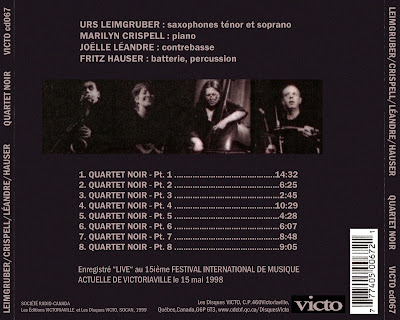 Recorded live at the Victoriaville Festival in 1998 , this 67-minute spontaneous composition is explosive not only for what happens in it, but for what doesn't. The guns don't blaze here very often, but they are just as deadly with silencers on. And needless to say, when Urs Leimgruber is the least-known musician in a quartet, you have some heavyweight players. The quartet is aptly named, given its performance, which uses night not only as a metaphor, but as an m.o. for improvisation, where texture, space, and economy become a hypnotic wilderness of sound devoid of light and all sensation but hearing.

The opening section is the longest, at 14 minutes. It is the area where the band members establish the language from which they will speak. That syntax develops very slowly on this record, moving one step at a time but no less packed with ideas for its easy, even tortoise-like pace. There is nothing tentative in the manner in which these players relate to one another, but it is subtle. Crispell clearly has control; she keeps each element blending into the others with her colorful swaths of clustered notes and mode-changing lines. Leandre and Hauser forge their own sense of rhythm for Leimgruber to create the group's melodic sensibility and intervalic coordination. Finally, in the very last of eight movements, dawn begins to break and the light startles the players. Crispell drives into the coming storm first, charging in a flurry of augmented chords and single-note runs. Leimgruber follows as Hauser triple-times everyone.

As tension reaches a fever pitch and everyone has been wakened from their somnambulant pondering in this beautiful abyss, Leandre brings in the final aspect of a dawn rooted to not only the sun, but the earth, and the piece comes to a winding, floating halt — leaving, I am sure, everyone in that audience wondering just what had taken place during that hour when they were hypnotized.