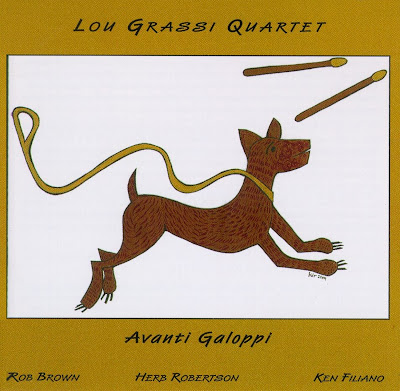 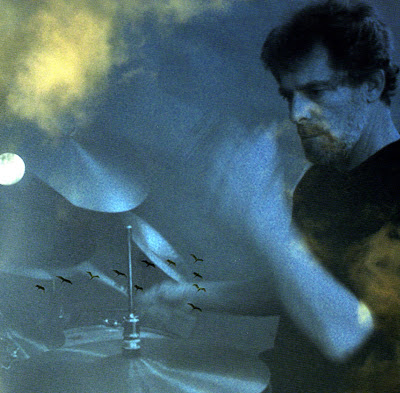 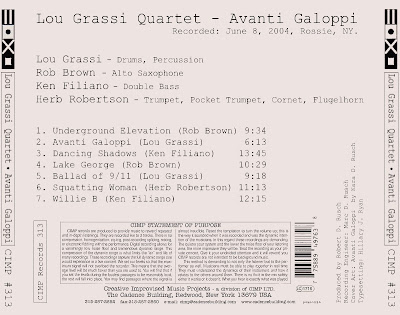 
Description : Featuring Rob Brown on alto sax, Herb Robertson on trumpets, Ken Filiano on double bass and Lou Grassi on drums. The downtown drum sensation Lou Grassi's 7th superb release for the CIMP/Cadence empire, his 21st appearance on CIMP alone. This is the first release by this swell downtown all-star quartet, although it would hard to tell from listening to this inspired offering. All four members contributed compositions, so we have a most diverse program. Rob's "Underground Elevation" features a solemn theme and warm harmonies for both horns, with Ken's lovely bass strumming eloquently underneath and Lou's sublime cymbal and mallet work. It is Rob's passionate alto solo that really shines through as Herb also spins off another of those spunky, spectacular (pocket?) trumpet solos. The title piece features more somber horn playing as the rhythm team plays this goofy, prancing groove. Ken's "Dancing Shadows" has the bass and drums fluttering profusely while horns spiral around one another like bees around a hive. Herb's solo is another astonishing flurry of notes, which is too good to believe. "Ballad of 9/11" is a somber, dreamy ballad with some sad, drifting horns, which builds into a fine affective portrait of a sad day. Herb's strange "Squatting Women" is filled with unexpected twists and turns, hypnotic bowed bass creates a unnerving cushion below the odd horn squeaks and squawks, trading ideas back and forth and together as they ascend. Truly, an incredible piece. Finally, Ken's "Willie B" is fueled by more mesmerizing bowed bass, spinning mallets and droning horns which make way for a crowning conclusion, after a few inspired solos from Rob and Herb. 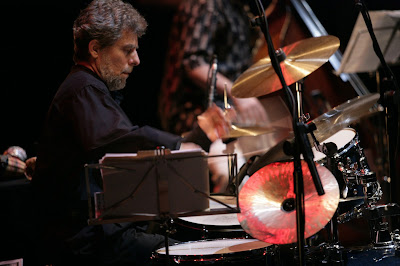 Inspiration for album titles rarely conforms to any sort of conventional wisdom. Witness the curious phrase chosen by drummer Lou Grassi to christen his latest CIMP offering. The Italian expression translates to "gallop ahead," a directive that mirrors Grassi's tendency toward barely bridled energy behind his kit. Subtlety and passivity aren't his usual temperaments and he's vigorously stoked the rhythmic engines of many a free music ensemble. Still, his sensitive touch on the balladic opening piece here counters the argument that his sticks are somehow allergic to poise or restraint.

Grassi's colleagues on this early summer Spirit Room date are just as adept at dodging easy codification. Brown remains one of the foremost active voices on his horn. His name surfaces on a steady number of sessions each year as sideman and leader, but it does so unassumedly and without ego. Robertson and Filiano keep similar busy schedules. But again their efforts largely elude the notice of the larger jazz press, a routine blunder made all the more distressing given their deserving talents. Fortunately CIMP protocol doesn't revolve around industry scuttlebutt, and these four receive a justly earned opportunity to commit a handful of original compositions to tape. 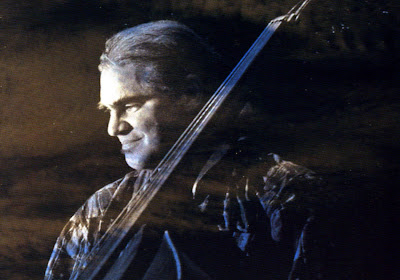 The title track unfurls as a taciturn dirge anchored on the dull drone of Filiano's bass and a clip-clop rhythm on Grassi's cymbals and toms. Brown and Robertson engage in exchange of liquid legato lines framed by pockets of polyphony that lead to a sudden and pensively stated close. Built on a cyclic rhythmic vamp, Filiano's "Dancing Shadows" sounds a bit threadbare across its nearly fourteen minutes, but a singing stops-laden solo from the composer late in the piece counterweights earlier meandering moments. Brown's "Lake George" also works off a repetitive ostinato from Filiano coupled to a steady shuffle beat. Among the criminally unsung on his instrument, the bassist's pitch-perfect patterns convey the harmonic glue of the group. Robertson's muted pocket trumpet is oddly (if intentionally) off-mic and the transitions feel a bit forced, particularly from Grassi's corner, but the finely-threaded theme is a memorable one. The trumpeter's stuttering smears and growls on "Squatting Woman" register in stark contrast, exemplifying his complete command of tonal dynamics and a voice as expressive as it is exacting.

Sincere in sentiment and appropriately downcast in mood, the leader's "Ballad of 9/11" doesn't strike sparks until its final minutes. when the horns ramp up the intensity in a push of florid, twining lines led by Brown's gravity-nullifying alto. The band closes with "Willie B," another Filiano piece that gains momentum from unaccompanied prefatory exchange between the horns. Grassi's churning tom rolls punctuate the action in a brawny closing solo more in line with his usual brio. The program may not register with as the finest work from any of these players, but there's still more than enough collective creativity and quality on hand to recommend it.