Excerpt from the booklet:

(…) Enjoying the flute is not easy, but to enjoy it in all the ways it can be played (…) is practically impossible. Carlos Bechegas (…) knows all the secrets of the flute and how to practice transgression with it, talking to it, suffering with it as it is blown.
(…)
Even though the flute is one of the oldest musical instruments in the history of humanity, it is one of the least used in the world of free improvised music. (…) Born in Lisbon (Portugal) in 1957, Carlos Bechegas studied (like Keith Rowe or Peter Brötzmann) visual and graphic arts, and while pursuing an academic classical education, played jazz- rock, Portuguese popular music, and big-band Jazz. After taking part in improvised music workshops with Steve Lacy, Evan Parker, Richard Teitelbaum and playing with his compatriot Carlos Zingaro, he decided to give up his alto and soprano saxes in 1988 and go in search of new musical territories by transferring contemporary flute playing extended techniques to improvisation and by using electronics. After the release of his trio-CD ´Movement Sounds´ (1997) and a remarkable solo album (´Flute Landscapes´ , 1998) he decided to play live with other improvising musicians. He made contact with Peter Kowald through an improvised music workshop held by the bassist at Lisbon´s Goethe Institute in 1997, followed by a duo concert at the ´O da Guarda´ Improvisation Festival in 1999. The similarity of intention, attitude and material between the two men convinced them to record together in duo.
(…)
Peter Kowald, a celebrated and prize-winning practitioner in the field of improvised music (…) turns the bass into a machine for commentary and direct speech. (…) He brings new unorthodox playing methods to bear, both in his pizzicato work alternating deep sonorities and harmonics, and in his use of the bow (particularly in combining low notes with his voice), contributing to create complex structures and a dreamlike universe with hypnotic qualities. On flute, Carlos Bechegas covers his nervous and timbered phrasing with a great variety of colours and effects borrowed from contemporary music: multiphonics, flutter-tonguing, micro-tonality, percussive key effects, glissandi, use of the voice, circular breathing. Together, they create bright and rugged landscapes where the listener is carried away in the maelstrom of their passionate and generous play. 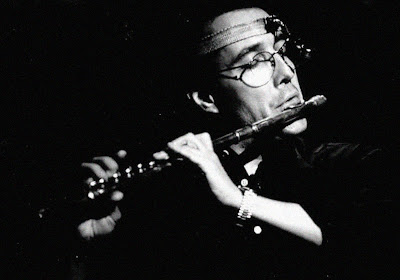 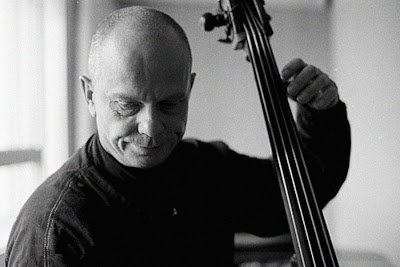 On his 1998 solo CD Flute Landscapes, Carlos Bechegas was applying extended techniques developed by free improvisers like Evan Parker, Derek Bailey, and bassist Peter Kowald. In the case of the last artist, it led to a fruitful relationship, as Open Secrets testifies. Recorded in a Portuguese studio in October 1999, this CD demonstrates how like minded the two musicians are. Their level of communication is exemplary. Bechegas integrates his voice in his flute playing, something that has become a trademark for Kowald, especially when using the bow. Therefore some of these duets sound like quartets; "Part 10," featuring the bassist's scary basso profondo, is simply stunning. At the beginning of "Part 7," it is the bassist who mimics the flutist, playing the high register. The 13 free improvisations are kept short (nothing over eight minutes), dense, and electrified. In "Part 3," Bechegas' flute jumps all around, unstoppable, while Kowald tries to keep up, obviously amused. The flute's flutter-like exuberance completes the bassist's more introverted playing to a surprising extent — they were born to play together. Some free improv records are inhabited by a magical atmosphere. Open Secrets is one of them. All the promises found in Flute Landscapes have been kept. This is the first release on Bechegas' imprint Forward, and his first recording with a renowned improvisor. Strongly recommended .