Description : Recorded live at the Termite Club in Leeds in September of 2003 and featuring Frode Gjerstad on clarinets and alto sax, Nick Stephens on bass and Paul Hession on drums. Finland's finest free sax player, Frode Gjerstad, never seems to rest as he can be found on 40+ discs from a half dozen different labels. His long-term relationship with John Stevens & Johnny Dyani in Detail and 3 discs with Derek Bailey, remain amongst his most visible successes. He chooses to work with the best players from around the world: Bobby Bradford, Borah Bergman, Peter Brotzmann, Paal Nilssen-Love, William Parker & Hamid Drake, to name a few.
Here with matches wits with some of the UK's best, Nick Stephens on acoustic bass and Paul Hession on drums. Consisting of two long pieces (25 1/2 & 37 minutes) and one shorter piece and well-recorded as are all of Nick Stephens' superb Loose Torque releases. "Meeting at the Adelphi" begins quietly with Frode playing a great deal of eerie clarinet as Nick bows expressively, the piece is filled with suspense. Paul Hession, also takes his time and delicately knits with his equally subtle drumming. Nick's immense bass is again at the center of the storm as it builds through intense sections. This mighty trio obviously mean business as they take us all for wonderful ride up and down the mountains and valleys, there is no turning back as soar to the stratosphere and beyond. - BLG

His relationship with John Stevens which started in 1981 and lasted up until Stevens' death in 1994 was of great importance both musically as well as on a personal level. Through Stevens, he became acquainted with the playing of some of the finest British improvisers. His longstanding group with Stevens, 'Detail', started as a trio in 1981 with keyboardist Eivin One Pedersen, though Johnny Mbizo Dyani came in on bass in 1982 and Pedersen left later that year. The group played mainly as a trio until Dyani's death in 1986, though they did invite occasional guests to fill out the lineup; they undertook a tour of Britain in 1986 as a quartet with Bobby Bradford on cornet. Bradford did another tour with Detail with Paul Rogers on bass and then one with Kent Carter on bass; a quartet tour of Norway was organised with Billy Bang in 1989. The group then continued as a trio with Carter till 1994 when Stevens died.

Frode Gjerstad has also been active, running a group of very young Norwegian musicians, Circulasione Totale Orchestra, where he is dealing with electric instruments and modern rock- oriented rhythms. He has used the band to present his own compositions as well as a workshop and place for young people to get to know free improvisation. The band presented a commissioned work at the Molde Festival in 1989 with a 13 man band combining free improvisastions, compositions as well as rapping and scratching (three horns, three bassists, three drummers, accordion, guitar, a rapper and a scratcher).

His current groups include: the Frode Gjerstad Trio with William Parker,bass and Rashid Bakr, drums; the Circulasione Totale Orchestra with young Norwegian musicians; and a quartet completed by Hasse Poulsen, guitars, Nick Stephens, bass, and Louis Moholo, drums. Frode Gjerstad has received several grants from differnt foundations and has been very active in the Norwegian Jazzmusicians Federation as well as in the committee for the Norwegian Contemporary Music Federation. He runs his own label, Circulasione Totale. 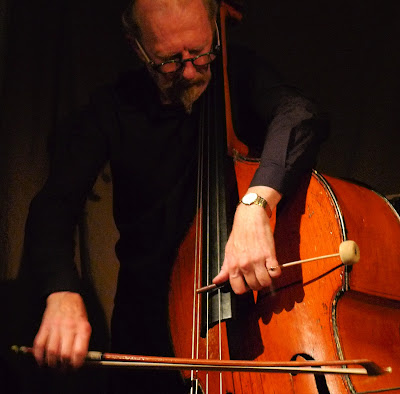 Nick Stephens started his first group aged 14, playing bass guitar, with schoolfriend guitarist Dave Cole. Through their teenage years they played the pubs, clubs, dance halls and US Bases of the UK and Europe. At 21 he returned home, bought a double bass and joined the Midlands Youth Jazz Orchestra. Here he met and played with Dave Panton and Jan Steele. And then, Stephens, says, "One afternoon a hurricane of energy with a snare drum under his arm and the look of Rasputin, burst into the orchestra rehearsal room. It was my first experience of a John Stevens workshop."

In 1975 Nick Stephens took his bass guitar to Riverside Studio for a blow with John Stevens and Trevor Watts who were re-forming 'Away' This marked the beginning of a long friendship and musical partnership between Stevens and Stephens. A record deal with the Phonogram Vertigo label produced 3 albums and 2 singles, one of which - 'Annie' - an Alternative Charts topper, featured John Martyn. Away made regular radio broadcasts and appeared twice on BBC Two's Old Grey Whistle Test. They played two national tours of large rock venues - one with The Jazz Crusaders and opposite Ornette Coleman at London's Victoria - but John never lost sight of the collective, group improvisation ethic that he had first nurtured in the SME and at The Little Theatre Club. Nick continued to work with John until his death in 1994 playing in The Dance Orchestra, Folkus, Freebop, Fast Colour and umpteen small group gigs and workshops.

In 2005, to make available music that has escaped documentation and as an outlet for new recordings, Nick Stephens started the Loose Torque label.