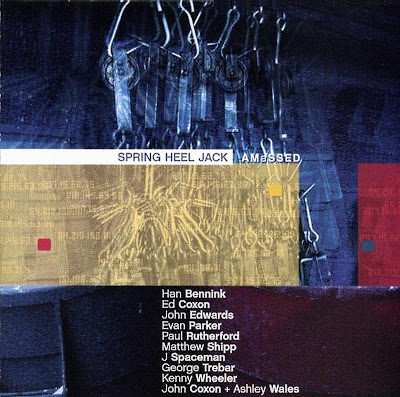 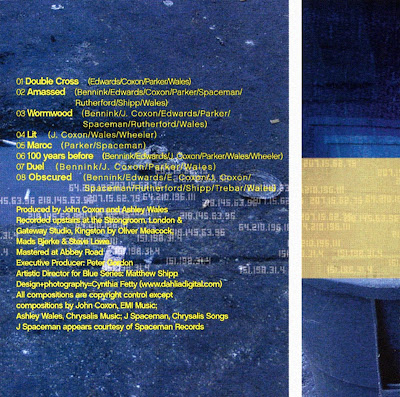 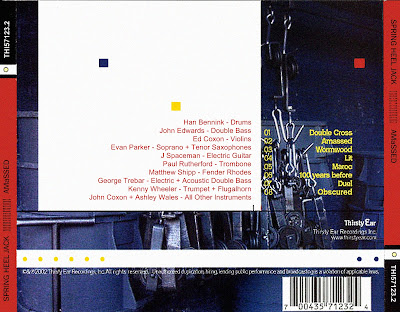 John Coxon and Ashley Wales are back with their second installment of "Free Jazz plus Electronics" for Thirsty Ear's Blue Series. The Blue Series has, over the past couple of years, been a much-needed shot in the arm for recorded Jazz, presenting different approaches and ideas than the saccharine parade of dusty reissues and nostalgia acts still being churned out by most of the Major labels. Thirsty Ear has, effectively, thrown down a gauntlet by depicting Jazz as a living, thriving, and still-evolving musical genre. Moreover, while their releases depict the incorporation of such controversial material as electronics, dance-hall beats and DJ- ing, the focus is never on mere novelty, but is backed up by strong and committed performances from the participating musicians. AMaSSED is no exception.

AMaSSED does not present itself simply as a sequel -- Son of Masses, as it were. Instead, the combination of players new to the project and continuing participants allows SHJ to both invent entirely new compositions and to reinvestigate some of the material from Masses. The most notable example of the latter is the recycling of George Trebar's ostinato, open-string, one-note bass groove, first used on the Masses track "Chiaroscuro", on the even-more frenetic AMaSSED cut "Obscured". Gotta love the alliteration, by the way. Comparing the two pieces, one hears different sets of musicians, many accustomed to a more atonal atmosphere than the one-note ground provides them, seeking to obliterate its insistent low E with increasing violence. They create a pair of berserk yet inspired jams (for lack of a better word). There seems to be some resonance in these pieces with the effect achieved on Radiohead's Kid A by the horn section that plays on "National Anthem".

Another inspired effort is "Maroc"'s duet between Pierce and Parker. Parker plays his characteristic cascades of notes, while Pierce interjects both judicious feedback and spare textural playing. Despite the resultant flurry, neither seems to get in the other's way. Kenny Wheeler's always affecting playing is nicely featured, particularly his negotiation of the most stratospheric register trumpet will allow, on "Lit". "Double Cross" finds string players Edwards and Coxon playing with Parker and Wales on an ethereal composition that presents itself with the intimacy of chamber music.

Han Bennink and Ed Coxon tear it up on "Duel"; this cut is also an excellent demonstration of SHJ's more overt contributions. Throughout, the electronic duo are never heavy-handed with their interjections of beats and sound material. Turning this music into some kind of raver's bad trip by loading it with heavy, pulsing backgrounds would be a tragedy, given the flexibility of rhythm found in Avant-Jazz in general and especially when considering the sensitive playing found here. SHJ instead react appropriately to the sounds created by their collaborators, with flexible and fleeting beats and well-spaced dabs of synthetic sound.

In addition to the aforementioned "Obscured", "100 Years Before", "Wormwood" and the title track all feature larger cross-sections of the participants. One might suppose that the danger in these ensemble efforts, especially once electronics are added to the mix, is that the result will be dense and cluttered. However, this never appears to be a problem. Whether due to judicious editing, sensitive interaction, or some combination of the two, the music on AMaSSED is possessed of both clarity of texture and narrative flow.

Will the innovations and trends depicted in the Blue Series prove enduring? Only time will tell. However, the rapprochement between two wings of experimental music (Avant-Jazz and Electronica) indicated by AMaSSED and other recent recordings, seems to hold out the promise of much fertile musical creation in the future. Unlike many other recordings released this past year, Spring Heel Jack's latest seems to speak to the here and now instead of the past, all the while keeping an eye on what comes next.