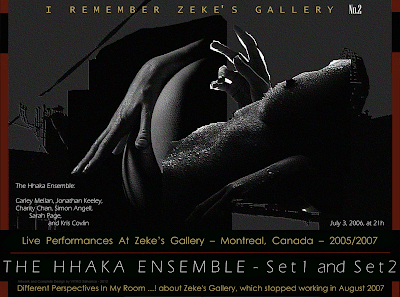 Graphic Design:
Poster – No. 2
Live Performances At Zeke’s Gallery – Montreal, Canada – 2005/07
Different Perspectives In My Room ...! about Zeke's Gallery, which stopped working in August 2007
Artwork and Complete Design by VITKO Salvarica
ART&JAZZ Studio SALVARICA – 2012
The used materials are the old photos, for the new posters.

The Zeke’s Gallery Performances & Interviews , were included live band recordings, poetry readings, theater performances, and interviews with artists and other people involved in making art and culture in Montreal. A fiercely independent art gallery started in 1998, Zeke's Gallery began recording the bands and poets who performed in their space in 2001. As time progressed, the recordings began to expand in scope and incorporated in-depth interviews with artists exhibiting at the gallery.


Periodically, in several episodes, I'll introduce you to some interesting shots, which occurred on the premises of Zeke's Gallery. The material I found on "The Zeke's Gallery Podcasts".
I fixed the sound quality, digital audio format is MP3@320, and you can find a link in the comments.
As such, this material, will be published only on this blog.
I hope that you will discover something new.


Well, in this second part of walk through the Zeke's Gallery, listen: