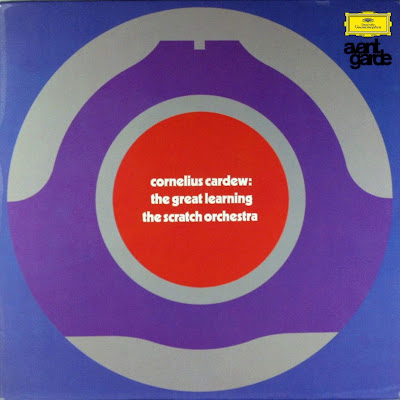 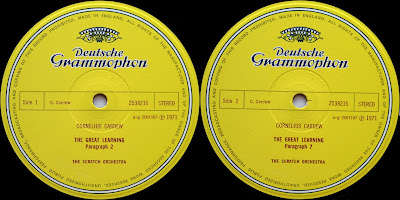 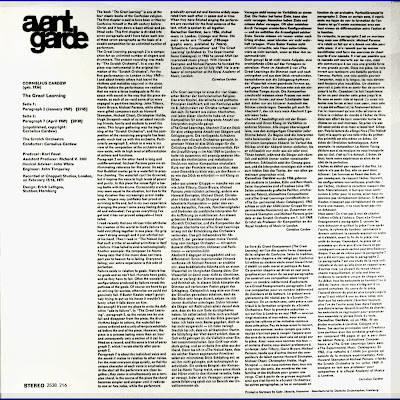 Though David Jackman is not mentioned anywhere on the sleeve, he was an active member of the Scratch Orchestra at this point and is probably one of the massed singers. Some of the other members mentioned in the liner notes are: John Tillbury, Gavin Bryars, Michael Parsons, Howard Skempton, Michael Chant, Christopher Hobbs, and Hugh Shrapnel - each of who recruited friends, family and students to swell the ranks.
Paragraph 2
Cornelius Cardew composed experimental works for each of the seven paragraphs of The Great Learning by Confucius (translated into English by Ezra Pound). Each piece is for different instrumentation. Paragraph 2, for drums and voices: groups were situated around outdoor arcade, each group consisting of one drummer and a number of singers. The drummers play through twenty-six rhythms, in any order each chooses, while the associated vocalists sing the text from Confucius on notes that evolve slowly, timing their entrance to the downbeat of their particular drummer. Each group is autonomous, and each performance unique.
Paragraph 7
Paragraph 7 is less raucous than Paragraph 2, being for singers only. Each singer chooses a pitch to begin, and sings the first line ("If"—see the score below) softly eight times, each time for the length of a breath. Then she moves around the space, listening to other singers, until hearing a new pitch of her choice, at which time she sings the second line ("the root", five times) on that pitch. Everyone progresses through the piece this way, as a cloud of pitches gradually coalesces into several clusters. The audience moves throughout the space, similarly to the singers, so the piece is a locomotive and auditory kaleidoscope.

Consider this statement of Morton Feldman in 1966: “Any direction modern music will take in England will come about only through Cardew, because of him, by way of him. If the new ideas in music are felt today as a movement in England, it’s because he acts as a moral force, a moral centre” (quoted by Michael Nyman in Experimental Music: Cage and Beyond, 115). 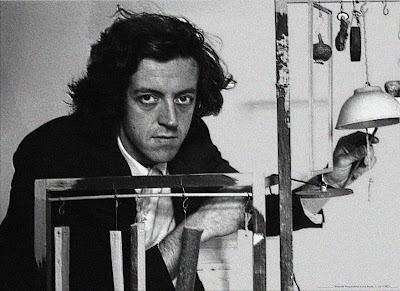 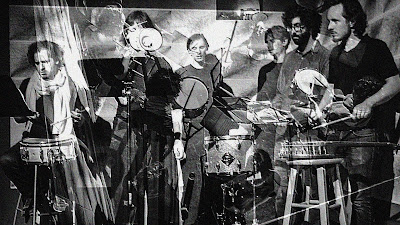 Born in England in1931, Cardew became involved on the continental music scene during the late the 1950's, years that marked the consolidation of the postwar avant-garde’s achievement. Cardew worked with Stockhausen from 1956 to 1960, serving as the composer’s assistant in the production of Carre, and was associated with Cage for fully a decade (1958-68). As a performer, writer, and organizer of concerts, Cardew actively promoted the music of these and other adventurous composers, including Pierre Boulez, Christian Wolff, and Terry Riley. Cardew thus established his credentials as an experimental music professional during these years, yet that very professionalism eventually struck him as problematic: Cardew viewed contemporary music increasingly as the occupation of a highly trained elite, completely removed from the experience of the general public. Dissatisfied with this situation for both musical and political reasons (Cardew had become active in leftist politics at this time), Cardew became interested in music that could bridge the gap between amateurs and professionals. Cardew’s compositional response to this challenge during the years 1963-67 was Treatise: a graphic score of nearly 200 pages. Experimental composers such as Morton Feldman, Christian Wolff, and Earle Brown had been using graphic scores for years, but Cardew’s was different: he provided no instructions for interpretation of the images. The performer is presented with page after page of complex combinations of circles, lines, squares, triangles, and their derivatives, yet no instrumentation is specified, nor is the relationship of the images to pitch or rhythm in any way explained. The performers of Treatise must study the images and realize them through improvisation or in fully-notated compositions. Writing some years later in his Treatise Handbook, Cardew stated his intention [“Each player interprets the score according to his own acumen and sensibility. He may be guided by many things—by the internal structure of the score itself, by his personal experience of music-making, by reference to the various traditions growing up around this or other indeterminate works, by the action of the other musicians working on the piece, and—failing these—by conversation with the composer during rehearsal. (Treatise Handbook, Edition Peters, 1971, xii)]. Treatise is perhaps best regarded less as a composition than as a stimulus to composition. 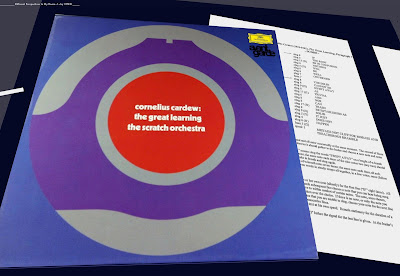 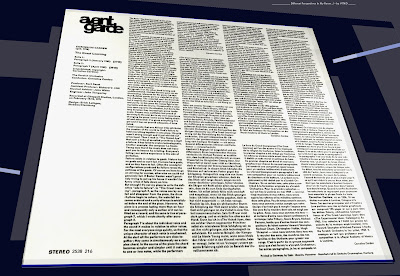 In its breadth, complexity, and rigor, Treatise was an enormous achievement, yet it did not lead to a subsequent series of graphic works. Instead, Cardew sought to create music that not only was accessible to amateurs, but that could be performed by large groups of people. Part of the solution, Cardew believed, was to establish a community of performers, a community that embraced individuals of varied talents and backgrounds who would approach music-making in a collective manner. This was the impetus behind The Scratch Orchestra, the focus of Cardew’s activities in London during the years 1969-72. As described in “A Scratch Orchestra: draft constitution” (Cardew, Scratch Music, 10-11) the ensemble of professional and nonprofessional musicians engaged in improvisation rites, “scratch music” (structured improvisation), popular classics (traditional works, freely adapted from memory by the performers at hand), composition, and research projects. Since most of this music was improvised to some extent and was not recorded, it has faded from memory. The notable exception is The Great Learning, Cardew’s monumental setting of a text by Confucius. If Treatise stands as Cardew’s major composition of the 1963-66, The Great Learning is his masterwork of the Scratch Orchestra period.