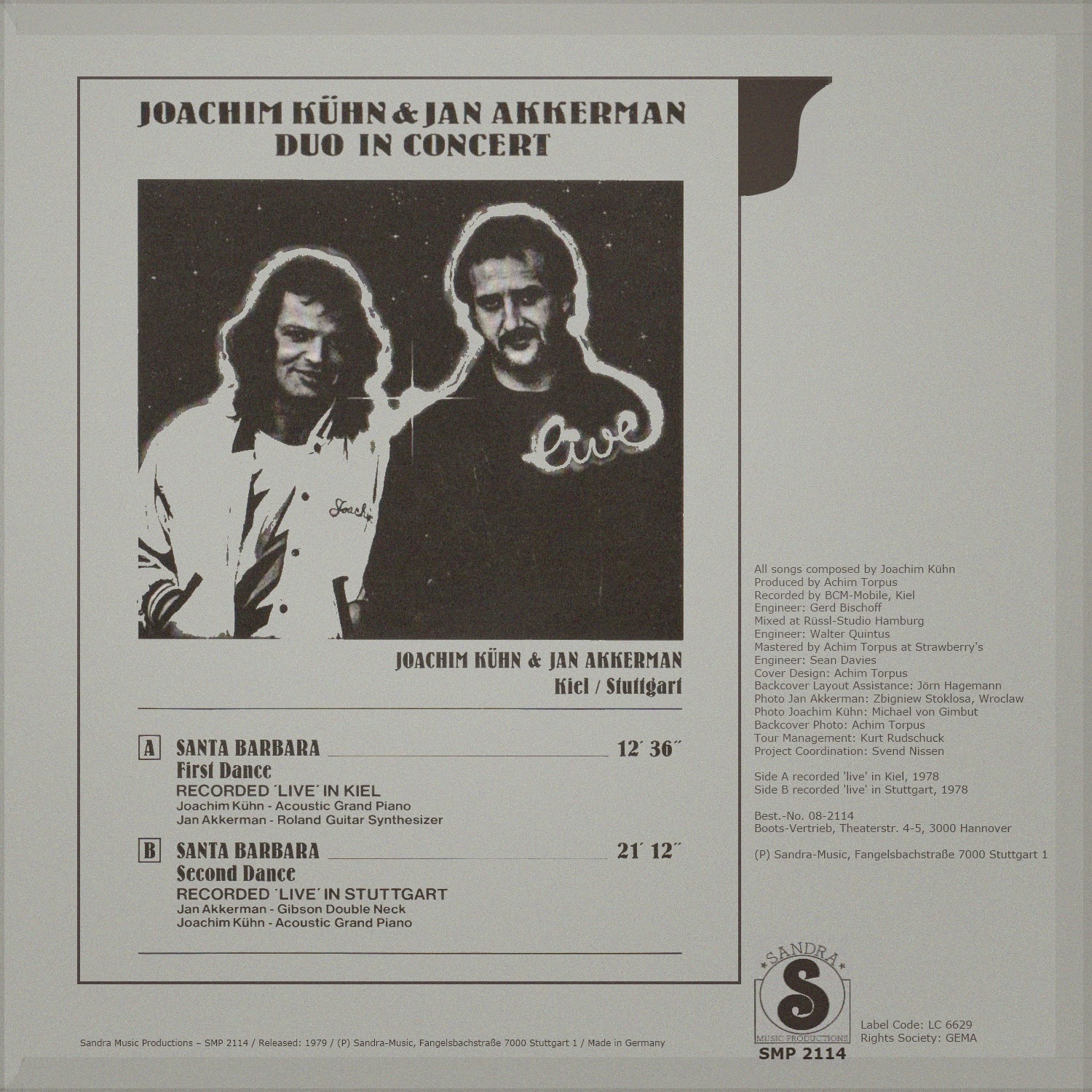 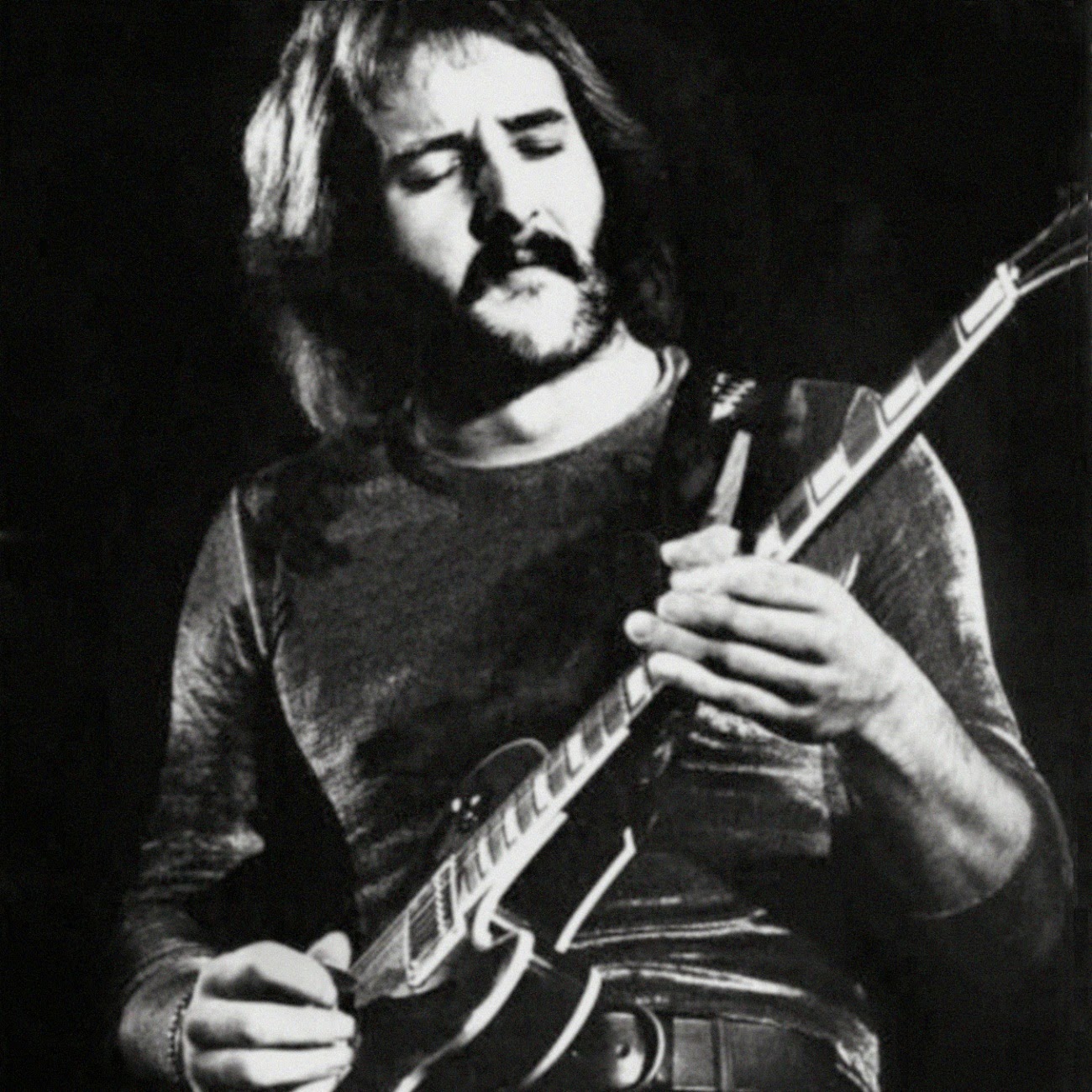 Like all the best musical conversations between two improvising players, the dialogue on this album has not two voices but three. There are the solo contributions of Kühn and Akkerman, and a third composite voice provided by the blending of piano and guitar - a voice that represents the spontaneous musical rapport between these two outstanding musicians.

In a very real sense, this recording offers a fascinating portrait of the growth in a musical relationship which can take place when compitable, sensitive and listening players spend night after night in duo performances.

It was during an extended European tour of more than 40 concerts that these tracks were recorded, the first at the beginning of the tour and second some four weeks later. The same Joachim Kühn composition is featured on both tracks - a piece the pianist actually composed in Santa Barbara, California - and it is fascinating to see how the interact between Kühn and Akkerman and their development of the work changed during the period between the first recording and the second. As Joachim Kühn says: "When we made the first recording the piece was pretty new. But by the time we came to record it the second time, Jan and I were able to be much more adventurous and, of course, we had developed a much deeper mutual understanding".

The collaboration between Joachim Kühn and Jan Akkerman is the ultimate fruition of a friendship which began in Bonn back in the midseventies when Joachim was working with "Association P.C." and Jan guested with the band. Since then the two have made considerable inspiration from each other's music. They have also drawn increasingly enthustiastic audience response.

- On a sunny afternoon in October 1980 they played two duo-concerts before estatic audiences at the twice sold-out Philharmonic Hall in Wroclaw, Poland. In 1981 on their second European tour Joachim Kühn could be seen live on Polish TV performing solo-piano at the Congress-Centre, Warzawa, befire a tentative audience of 3.500 people.

The duo continued to tour numerous succesful concerts in major venues such as the "Berlin Art Academy" (Hochschule der Künste), "Schauspielhaus" Hamburg. Kühn & Akkerman were also featured on many TV- and radioshows.

Says Jan: "Joachim is one of the greatest piano players around and he really turned me on to play again. I'd drifted away from the guitar after Focus broke up in 1974, not being able to decide which musical direction to take. Teaming up with Joachim is one of the hardest things I ever did, but also one of the most rewarding."

Akkerman, who is heard playing guitar syntheziser on one track - for the first time on record - describes the music as "weird fusion of everything from blues to Bartók."

It goes without saying that Akkerman's high regard for Kühn's musicianship is fully reciprocated. "Jan knows the guitar so well and gets a fantastic big sound," says Joachim. "He is a natural musician and although he thinks of himself as a rock'n' roll guitarist, he has a very strong jazz feel. He has been turning me on to people like Joe Walsh and the Temptations and I've been getting him interested in McCoy Tyner."

That kind of musical exchange takes place on this album and it is fascinating to listen to the way in which each musician picks up on the "conversation" of the other, underlining it, adapting it, extending it, sometimes diverting it into another musical realm. This music on this album - spontaneous, technically brilliant, highly charged with self-expression and instinctive creativity - is improvised music at its best played by two mutually appreciative, superbly gifted instrumentalists. There is a cohesive compatibility throughout, no one hogs the limelight and the range of mood and dynamics sustains interest even though there is no formal chord sequence or reitarated theme pattern to serve as landmarks.