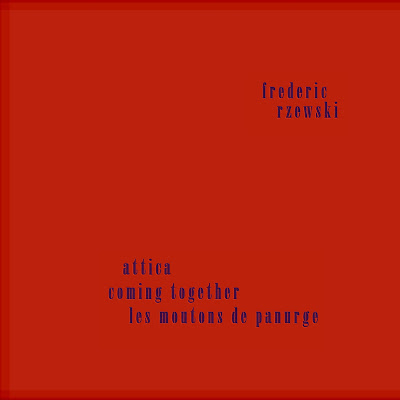 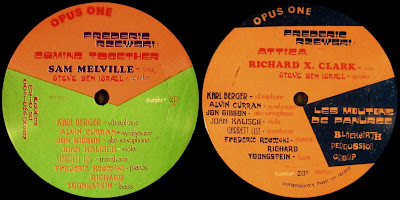 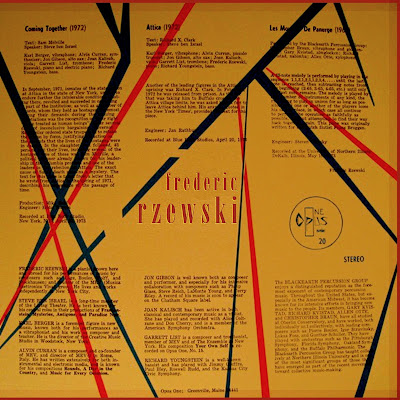 Note:
Cover has different typesetting for composer's name (stacked as opposed to on a single line) and lettering is in blue/violet instead of gold. This cover is fluorescent.
Labels on disc are reversed (A-label on B-side). Album has a piece of typewritten paper inserted stating the following:
"Please note: the labels on this record are reversed. We regret the inconvenience." 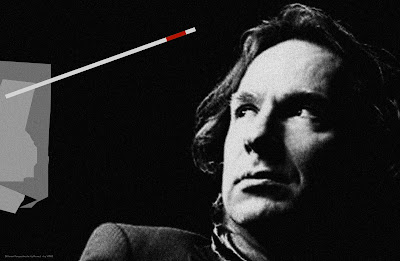 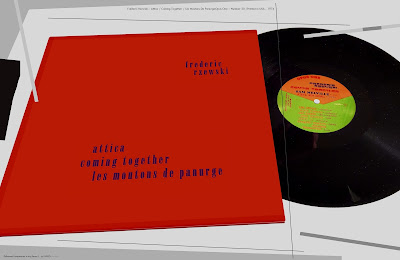 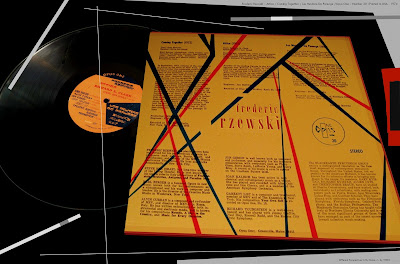 This brilliant early recording of Frederic Rzewski (unfortunately unavailable of 2002.) showcases the composer emerging from a period in which he was largely involved with free improvisation (with the group Musica Elettronica Viva) and beginning to investigate more structured writing.

The lineup on this recording is pretty amazing. Rzewski himself plays piano. Jon Gibson, who has worked with the big four minimalist composers (Young, Riley, Reich and Glass) as well as being an excellent composer himself, plays alto sax. Composer Alvin Curran, also of Rzewski's MEV group, plays synthesizer. Garrett List, whose beautiful LP "Your Own Self" already on this blog, plays trombone. Karl Berger play vibes, and has played on some classic ESP jazz recordings as well also working with Don Cherry. Violist Joan Kalisch has played on recordings by Don Cherry and Alice Coltrane, and Richard Youngstein has worked with Paul Bley. The reading is done by stage actor Steve Ben Israel, who was a member of New York's Living Theatre.

Here the burgeoning minimalist movement was a prime musical influence, although on two of the pieces what strikes the listener first and foremost is the political content. "Coming Together" melts a wonderfully undulating and propulsive score that just won't give up with the impassioned reading (by Steve ben Israel) of a text written by Sam Melville an inmate at Attica prison documenting both his woes and his impressive resolve not to knuckle under. The words are repeated with increasing ferocity as the music goes through several permutations, eventually matching the speaker in a roaring finish. When other prisoner Richard S. Clark was released from prison in 1972, he was asked by a reporter how it felt to leave Attica behind him. His response, "Attica is in front of me," provides the text for the powerful and haunting second work here. His words are spoken in additive fashion -- first just "Attica" then "Attica is" -- in a soft, almost ghostly fashion over a gently percolating score that combines sorrow and hope in a complex and rich fabric.

"Les Moutons de Panurge," a completely instrumental composition, uses the same basic structural idea. A 65-note melody is performed in the sequence 1, 1-2, 1-2-3, 1-2-3-4, and so on, until the entire melody has been read with the understanding of the near-impossibility of the ensemble staying in unison for the duration. Here, as performed by the Blackearth Percussion Group, it takes on the character of a wild gamelan orchestra, perhaps slightly tipsy. It's utterly invigorating, as is the entire record. Very highly recommended.
_ Review by Brian Olewnick

This LP was recorded is on the excellent Opus One records - all the covers of LPs on the label were meant to respond to black light!....... Trippy.