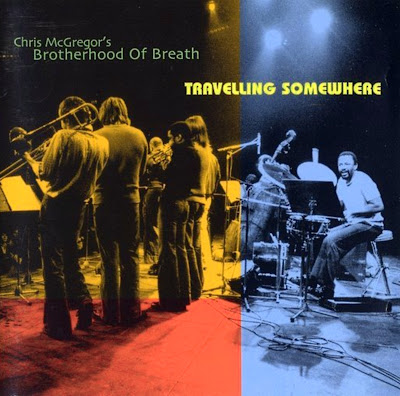 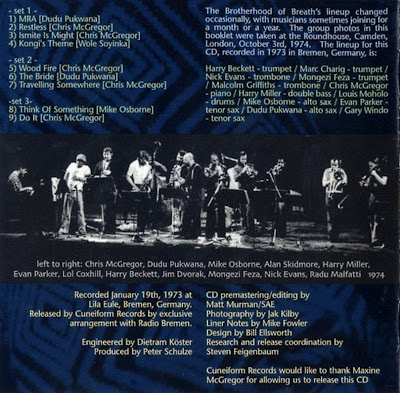 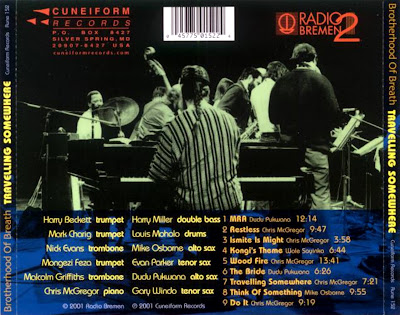 Travelling Somewhere consists of a concert recorded by Radio Bremen (Germany) on January 19, 1973, one week before the Chris McGregor & the Brotherhood of Breath show in Switzerland that would be released on Ogun in 1974 as Live at Willisau. 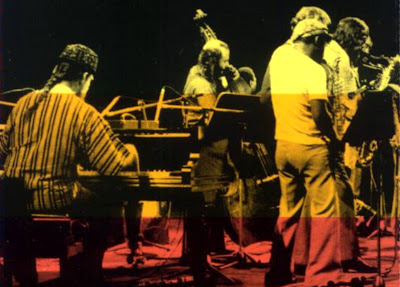 Ex-pat South African pianist McGregor made an immeasurable contribution to British and European jazz in the 1960's and 70's with his Blue Notes, a group of black South African jazz musicians whom the white bandleader hand-picked after hearing them perform at the 1962 Johannesburg Jazz Festival.

Opportunities for a mixed race group in South African being limited, to say the least, McGregor and his crew left their troubled homeland in 1964, and did most of their performing and recording in voluntary exile during the next twenty-five years. Several years after arriving in London with the Blue Notes, McGregor also assembled the Brotherhood of Breath, an ambitious avant garde big band which incorporated various members of the Blue Notes, along with the best of Great Britain's young jazzbos. McGregor struggled to keep the Brotherhood of Breath alive, and it performed sporadically over the years, with a revolving cast of musicians.

This CD documents an exceptional early live performance of the band, when they were at their creative peak. Perhaps because the United States has always been considered the ultimate repository of jazz talent, drummer Louis Moholo, alto saxophonist Dudu Pukwana and trumpeter Mongezi Feza have never really received critical attention commensurate with their abilities, but they were arguably as good as many of their more famous American counterparts. Put them together in a band with the young Evan Parker, Mark Charig, Gary Windo, Mike Osborne, Harry Beckett and Malcolm Griffiths (among others) and give them the energetic direction and compositional abilities of McGregor, and you have something very special.

Later editions of the Brotherhood might have been more sleek and refined, particularly in their studio incarnations, but there's an exuberant energy and density to these 1973 performances, recorded for Radio Bremen in front of a live audience, which at times reaches an almost ecstatic intensity. It's almost as if the Sun Ra Arkestra had been reconstituted in a parallel African reality.

Several pieces, particularly Pukwana's "MRA" and McGregor's "Do It," have the infectious and distinctive township highlife sound, the product of the cross-pollination of jazz and African dance rhythms. A seemingly simple, riff-based piece like "MRA' allows group members considerable latitude, as they improvise against the dominant riffs and develop counter-rhythms and melodies seemingly at will. The ragged collective improvisation periodically dissolves into chaos, only to reinvent itself and rise triumphantly from its own wreckage.

McGregor's "Restless" opens with the leader stating the quirky, Monkish theme on piano, and then showcasing Harry Beckett's eloquent trumpet and later, Pukwana's fiery alto sax. McGregor's "Ismite is Might" has the whole band wailing a slow, sonorous gospel dirge, which soon segues into "Kongi's Theme," a march-like piece with a stomping, second-line New Orleans beat. McGregor's "Wood Fire" starts with another Monkish figure, but soon extends into a freeform harmolodic mingling of multiple melody lines and patterns, making it clear that McGregor had absorbed some important ideas from Ornette Coleman. The title piece, another of McGregor's compositions, is primarily Pukwana's vehicle, as the band establishes a traditional swing groove with Pukwana's alto skittering and screeching over the top. Imagine Jimmy Lyons holding down the first alto chair in the Count Basie band, and you'll have some idea of this track's peculiar charms.

Cuneiform is to be commended for rescuing these tapes from the Radio Bremen archives, as the band's performance here is not just an important historical document, but even thirty-some years after the fact, a representation of some of the most vital and life-affirming big band jazz ever played by anyone, anywhere.