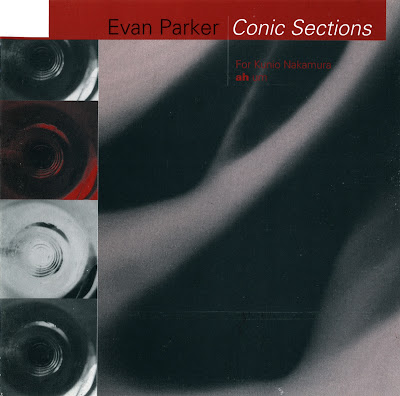 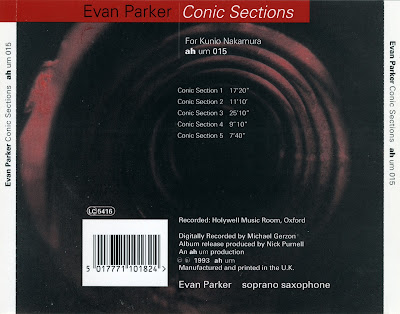 Dedicated to the memory of Kunio Nakamura, “Conic Sections”, is indeed one of Parker’s best releases, period. The five tracks are all outstanding in detail and instant vision, figurations and fantasies chiselled by the typical resourceful inventiveness – often bordering on sheer fury – that the English master shows whenever featured in a private examination of the meanders of consequentiality. The uncharacteristic acoustics of the recording studio donate a strange sense of timbral morphing, the reed resounding at times as a cello if one gets lost in the hurricane of upper partials and quick turns generated by the “ convoluted minimalism ” that this music actually represents. “ It seemed as though the room itself had something in mind too ” , says the saxophonist, and there ’ s no doubt that the pair works wonders on our lust for substantiality. These spirals of geniality are permeated with attitude and fluency at once, the listener receiving their gifts like unexpected twists in an otherwise humdrum life. Parker doesn ’ t know the meaning of “ happy medium ” , a continuous flux of impressive creativeness at the basis of an artistic route that I can ’ t but define as admirable, in which this record constitutes yet another essential landmark. 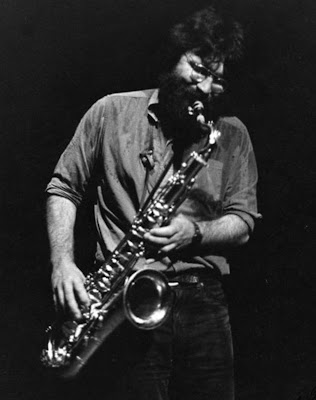 Of the many solo soprano recordings by British improviser Evan Parker, few offer as intimate a portrait as this one in terms of his development as an artist. In 1993, Parker had hit a new stride in his playing. He worked -- as he does now -- long hours to find a way through the improvisation barrier imposed by the restrictions of circular and conventional breathing, toward a series of microtonal possibilities that were adaptable in virtually any situation, solo or group. His practice had led him to a place of opening the breathing techniques toward new microphonics and multiple sonances. His wish to document them, however, led to his nearly abandoning his findings. He discovered that in the music rooms of Holywell in England, that the harmonic atmospherics of the room, of the architecture itself, provided an entirely new set of tonal and spatial possibilities he hadn't counted upon and proceeded to make a record to document those instead. There are five "Conic Sections" ranging in length from just over seven-and-a-half minutes to over 25. Duration is dependent on how an idea is expressed by the soloist (Parker) and looped back to him by the room itself. Certain tones and phrasings offer far more in the way of complex reverberation -- naturally occurring -- than others, inspiring different angles, shapes and colors from Parker. It's as if he is playing off the room, even though he has instigated the proceedings. The room never quits, and it is obvious that it will have the last sound, play the last note, no matter how hard Parker struggles against that dictum -- and he does for much of the recording. He uses every trick, technique, and grift to try to put off the inevitable, and in the process it takes him to some very interesting places musically. This is an exhausting yet exhilarating set to take in at one setting; it changes the listener's reality, turns it inside out for over 70 minutes, and allows one to hear, as music, some rather confounding sounds and breathing techniques. Amazing stuff.