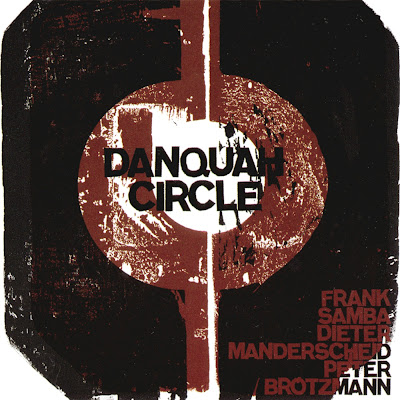 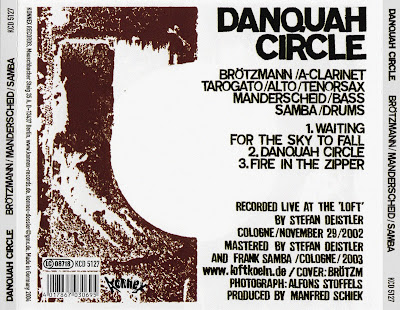 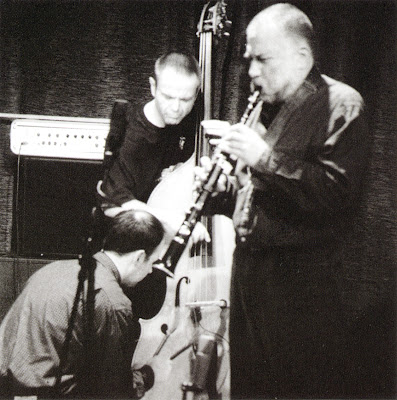 Featuring Peter Brötzmann on alto & tenor saxes, A clarinet & taragato, Dieter Manderscheid on bass and Frank Samba on drums and recorded live at the „Loft “ in Cologne in November of 2002. This fabulous trio first played the Loft in February of 1992, before leaving for a tour of West Africa. Their other important gig that year was at the Total Music meeting in Berlin and then they didn't get together for another decade, when this gig occurred.

This concert did not turn out to be a mere „revival “ as each of the players combined newly aquired influences with mutual curiosity, rather than basing the music upon pre-conceived textures from the past. In this regard, the reminiscence alone of the African tuor ’ s experience as a group formed the core of these INSTANT COMPOSITIONS. It was logical to explore this, without any previous rehearsal, at the place of their very first concert together...the result of this is now in your hands.

Well recorded and well-balanced, the trio begin with some sumptuous clarinet, contrabass and cymbals, soon flying high and wide, taking us on their great journey. Erupting intensely, things quiet down for a somber bass and cymbals duo, until Brötzmann picks up his trusty tenor sax and starts wailing, so watch out! The title is actually pretty restrained, yet no less intriguing. The oddly titled „Fire in the Zipper “ , again starts out quietly and builds to another powerful, flame-throwing conclusion. Another treasure form the great Brötzmann and company!