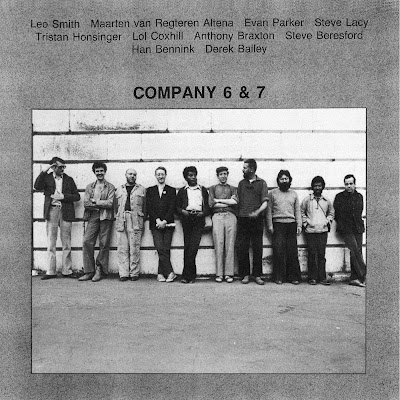 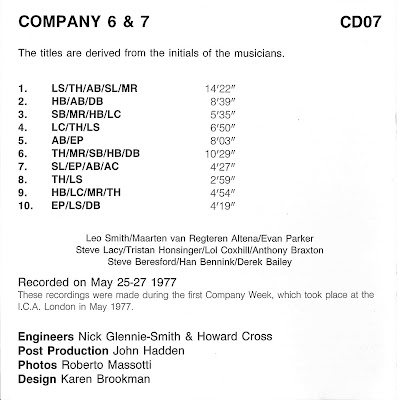 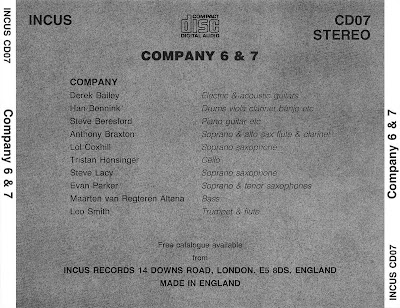 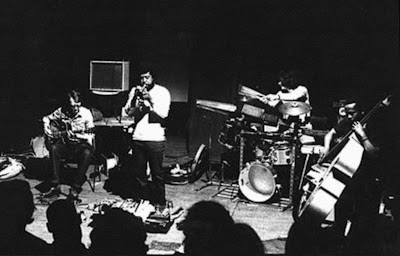 Derek Bailey has always been interested in the way that musicians react and interact within unfamiliar situations. Beginning in 1977, he began organizing regular events called "Company Week", in which a group of musicians was assembled to play in ad-hoc formations throughout the course of several days. The players are chosen with care: some will have extensive backgrounds in free improvisation, others will not; some will have worked with each other, some will have never even have heard each other's music. Bailey has remarked that by the end of the week the musicians will have settled into a working rapport but that he's not necessarily most interested in the more polished or empathetic performances that might result: he's most interested in the earlier stages, where musicians test each other out, warily responding & trying to find ways of communicating.

This disc documents performances from the first event, in May 1977. (Originally the performances were released sequentially on LPs numbered 1-7; this CD compiles most but not all of the last two LPs.) This was a historic encounter between some of the finest European free improvisors with a number of American free jazz musicians. In the former group: Bailey himself on guitar (as usual with Company Week, Bailey is perhaps the least prominent musician here, & in fact only plays on 3 tracks); Evan Parker & Lol Coxhill on saxophones; Steve Beresford on piano & miscellaneous instruments; Han Bennink on drums, clarinet, viola, banjo & anything else within range; Tristan Honsinger on cello & Maarten van Regteren Altena on Bass. The Americans are Steve Lacy & Anthony Braxton on saxophones, & the trumpeter Leo Smith.

It's hard to describe this music at all: one's strongest sense is of how differences in temperament & approach between musicians can lead to bewildering differences in result from track to track, depending on the personnel. One division here is between some of the Europeans whose playing involves a lot of sheer mischief & humour, & the "serious" approach of the Americans & some of the other Europeans. Beresford, Honsinger & Bennink are loose cannons, making tracks like "SB/MR/HB/LC", "HB/LC/MR/TH" & "TH/MR/SB/HB/DB" (the tracks are simply titled after the personnel on them) Dadaist assemblages of noise & mayhem. On the other hand, there's the beautiful, austere "AB/EP", a duo between Braxton & Parker that anticipates their marvellous 1993 duet disc on Leo. Listening to the disc again, it strikes me forcibly exactly how good the American players are, especially Leo Smith & Braxton--Braxton's improvising was surely never more trenchant than when he was a young lion in the 1970s, & he gives a bravura multiinstrumental performance on the opening track (which features Lacy, Smith, Braxton with Altena & Honsinger) that has him blowing saxophone, flute & clarinet in succession. Leo Smith is also outstanding on this album--try out his careening duet with Honsinger, "TH/LS", or the spacious trio that closes the disc with Parker & Bailey. The album also features one track performed by an extraordinary, once-in-a-lifetime quartet of soprano saxophonists--Parker, Coxhill, Braxton, Lacy--& will be treasured by collectors for just that.

By any definition this is "difficult music". It is also very rewarding, & historically important. A very welcome reissue, though it's a pity that the original albums weren't reissued in their entirety. -- One final note: Derek Bailey's friend, the poet Peter Riley, wrote extensively about the 1977 Company Week, & these writings are worth seeking out. The poems were published as _The Musicians The Instruments_ (The Many Press, 1978); the prose was only published a few years ago by Bailey, in a book simply called _Company Week_.