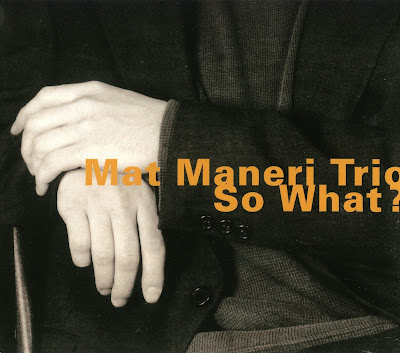 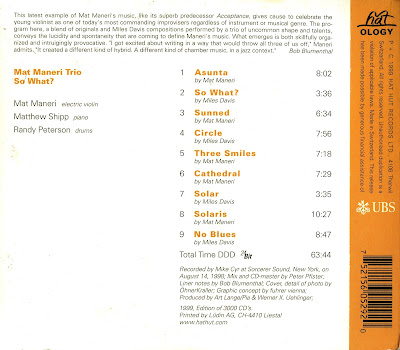 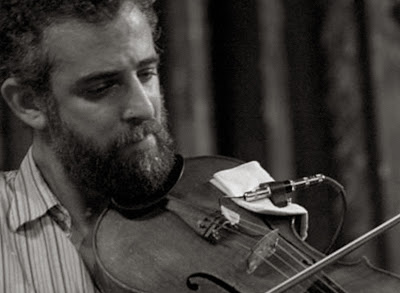 Mat Maneri, the world's challenging microtonal electric violinist, explains that he once studied Baroque violin, in which the bowing style creates an "almost horn like sound." He goes on to explain that "I'm not trying to get a horn sound now, but I am trying to get horn phrasing." Certainly there are moments on So What? when Maneris' violin sounds uncannily like a horn, whether with a conventional tone or even featuring growling multiphonics, as he does right at the beginning of this disc, on "Asunta."

His trio mates, the excellent pianist Matthew Shipp, and drummer Randy Peterson, are well- chosen for the rapidly shifting rhythms and moods that Maneri moves through on this intriguing set. Shipp specializes in arhythmic power piano, and has an arresting capacity for throwing out shimmering and glimmering melodic shards in the middle of the Maneri maelstrom. Much of this disc, however, features him interacting with Maneri on a low gear. He answers Maneri's Ornetteian maniacal rapid bowing with small clusters of his own. Then he shifts effortlessly with the violinist into quiet but not tranquil sections, in which Peterson jostles and huffs and the two string players trade and intertwine short, fragmentary motifs.

Maneri explains that he included four Miles Davis tunes in this set - "So What?," "Circle," "Solar," and "No Blues" - "to demonstrate that what we play is not random." The trio makes no attempt to play any of these tunes in anything resembling Milesian fashion, and they do indeed blend well here with the arch and ruminative bursts of Maneri's own compositions.
And it works: although they take each of these tunes in a direction that probably would make the Prince of Darkness blanch, the coherence of the melodic and rhythmic development of each - and of Maneri's own tunes, some of which (at least "Three Smiles" and "Solaris") seem to pay indirect tribute to Miles - is undeniable.

Maneri and Shipp are unafraid to traffic in classical motifs, and often these tracks approach that kind of sonority. But all of them are deeply and carefully thought out improvisations from excellent musicians.